Happy New Year of the Monkey

In Japan, New Year’s greetings are never made before January 1, so I am sending this on the morning of New Year’s Eve in the U.S.—but after the New Year has already begun in Japan.
As is common in this country, I am wishing you all a Happy New Year a day before the new year actually begins, and I pray for your health and happiness throughout 2016.
In the countries of East Asia, including Japan, 2016 is the Year of the Monkey. There is a 12 year cycle in the Asian zodiac, and today ends the Year of the Sheep.
(Of course, the Chinese new year, celebrated not only in China but in other Asian countries with strong Chinese influence, doesn’t begin until February 8—and it will be known as the year of the Fire Monkey.) 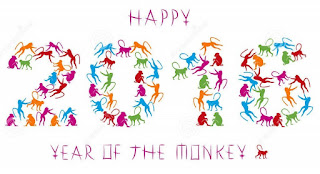 Those born in the Year of the Monkey are said to be “clever and skillful in grand-scale operations and are smart when making financial deals. They are inventive, original and are able to solve the most difficult problems with ease.”

Or according to another website, “Charming, charismatic and extremely inventive, Monkey people are most noted for their intelligence and clever genius in working out difficult problems for themselves and others.” (There are some negative characteristics also, but I will let you look those up for yourself.)
In this country, of course, it is often an insult to call someone a monkey. Sometimes it is even a racial slur. Just last week the Washington Post published, and then had to pull, a cartoon of Sen. Ted Cruz dressed like an organ grinder in a Santa suit with two monkeys on leashes.
Cruz charged that the cartoon was making fun of his two daughters. Actually, Pulitzer prize-winner Ann Telnaes was making reference to Cruz using his daughters in a political ad that began airing early last week.
In that new campaign ad he is reading “timeless Christmas classics” to his two daughters—classics such as “How ObamaCare Stole Christmas” and “The Grinch Who Lost Her Emails.”
Cruz’s daughter Caroline, 7, loudly reads the following line from the latter: “I know just what I’ll do, I’ll use my own server, and no one will be the wiser!”
It was Cruz using his children for his personal gain—like an organ grinder using dancing monkeys—that Telnaes was depicting. Cruz and other Republicans took it that she was ridiculing Cruz’s children by making them monkeys.
The outcry worked, and the newspaper removed the cartoon in question. But Cruz will likely continue using the ad with his daughter criticizing Hillary Clinton over something that his daughters don’t understand at all.
In East Asia, though, there is no stigma for being born in the year of the Monkey—or the year of the Rat, as were two of my children. There are good and bad characteristics for all twelve of the animals that are signs for each year of the cycle.
So, if you were born in the year of the Monkey, enjoy your special year. And, regardless of the year in which you were born, I do pray that 2016 will be a good one for you.
Posted by LKSeat at 9:00 AM