Fighting for the Four Freedoms

It is has been called the best State of the Union address of all time. That was President Roosevelt’s speech seventy-five years ago, on January 6, 1941. It is the one popularly known as the Four Freedoms address.

The beginning of the new year 75 years ago saw the Western world in turmoil—much worse than now in 2016. WWII had begun in Sept. 1939 with Germany’s invasion of Poland, and by June 1940 Germany had taken over much of Europe.

In July, Germany launched air attacks on England, bombings that lasted for months. Then Germany, Italy, and Japan formed the Axis Alliance in Sept. 1940. The situation was certainly grave for America’s allies across the Atlantic.

But Americans did not want to get involved in war again.


In that 1/6/41 address, Roosevelt sought to provide a rationale for why the U.S. should abandon the isolationist policies it had followed since WWI—such as refusing to join the League of Nations in 1920.

The four freedoms as propagated by FDR were not just for the U.S. They were explicitly his goal or vision for “everywhere in the world,” as he repeatedly said.


While FDR’s call for freedom from fear was primarily a call for “a world-wide reduction of armaments” along with the other three it became the center of attempts to rally public support for the war.


Artist Norman Rockwell made the “four freedoms” and support of the war even more popular with his noted paintings in 1943. 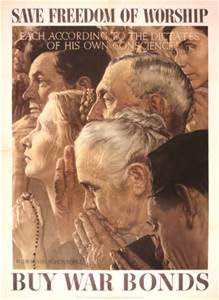 Just four days after his Jan. 6 speech, FDR proposed the Lend-Lease program, which was enacted two months later. It gave the President power to sell or lend food and armaments to the United Kingdom and other Allied nations—and later to the U.S.S.R.

There were still more than 4½ years of devastating war after FDR’s Jan. 1941 speech. But in Dec. 1948 the United Nations adopted the Universal Declaration of Human Rights, incorporating the four freedoms in the preamble.

But one wonders how many more people of the world enjoy those four freedoms now than 75 years ago. In this country, the first two freedoms are basically strong: after all, they are guaranteed in the Constitution.

But is there actually any more freedom from want and freedom from fear in the U.S. now than there was in 1941?

Fighting for those freedoms domestically is important for us to do—as well as working for them globally as part of the human race.


Freedom from want is needed by so many people around the world—and in this country, partly because people keep wanting more and more. But combatting income inequality and providing jobs with a living wage for everyone are two current imperatives.


Of course, fear of terrorism has been heightened in the past few months—by one incident in California and by heated political rhetoric of presidential candidates playing on people’s fears.


But the fight for freedom from fear is not done best by using weapons or violence. As Malala Yousafzai emphasizes, 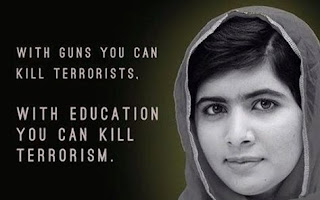 As 75 years ago, there still needs to be an emphasis on the four freedoms that FDR espoused. And we need to consider wisely the best way to fight for those freedoms.
Posted by LKSeat at 5:27 AM