The Poor and Christmas

It goes without saying that Christmas is the most widely, and most elaborately, celebrated holiday of the year. Many of you are right now making final feverish attempts to get ready for Christmas. (In fact, my guess is that because of the bustle of the season, some of you won’t see this until after Christmas.)

It also goes without saying that Christmas is very highly commercialized. If fact, the strength of the national economy is indicated by, as well as influenced by, the amount of spending at Christmas.
A poll taken a month ago indicated that shoppers around the country were planning to spend an average of $882 for gifts this holiday season. That was a significant increase from the $431 in 2009 when the economy was so bad, but still somewhat below the record of $1,052 in 2001.
(I wonder why it was so high then, just after the 9/11 attacks.)
With all of this spending, Christmas is a hard time for those who are poor. I feel sorry for parents, especially single moms, who have children at home. Because of peer pressure and constant advertising on television, most children seem to want, and expect, an awfully lot for Christmas.

I was amazed by some of the letters to Santa I saw in my hometown newspaper. Some asked for so much it would cost the average amount of $882 just to give them all they wanted.

There were, happily some exceptions. I was impressed with one boy who asked for “a pair of slippers and a good Christmas.” He may well have a better understanding of Christmas than most.
As Charles Pope, a prominent D.C. Catholic priest, has recently pointed out, poverty was an intrinsic aspect of the original story about the birth of Jesus.

The first Christmas was anything but charming or sentimental. It is charged with homelessness, hardship, a lack of decent resources, disregard for human life (by Herod), and the flight of the Holy Family as refugees and aliens in a foreign land.

In spite of all the pictures of Mary riding a donkey to Bethlehem, Pope doubts that that was her mode of travel. Donkeys were expensive, and he thinks it is more likely Joseph pushed her in a cart in that long, 70-mile trip from Nazareth.


And the reason proper lodging could not be found may have had more to do with money than space. Pope suggests, “Lodging could likely have been found for the right price.”


Then when Jesus was grown, he talked much about the poor. Soon after he began his public ministry, in his hometown Jesus read from the scroll of the prophet Isaiah:


The Spirit of the Lord is upon me,
because the Lord has anointed me.
He has sent me to preach good news to the poor, . . .


And then Jesus added these important words: ““Today, this scripture has been fulfilled just as you heard it” (Luke 4:17, 21; CEB). 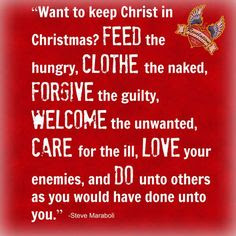 Soon after he began preaching in public, Jesus declared, “Blessed are you who are poor, / for yours is the kingdom of God.”
Last December, Manila Archbishop Luis Antonio Cardinal Tagle (who I am hoping will be the next Pope) said,

Christmas is never truly Christmas if we do not practice Jesus’ solidarity with the poor, the weak, and the neglected. Christmas is a season to see our own poverty, to see a companion in every person who suffers and to see Jesus in a needy brother or sister.

Those are important words to keep in mind this week—and all next year.