The first chapter of American Catholics in Transition is titled “The Legacy of Pre-Vatican II Catholics” and the authors refer to Catholics born in 1940 and earlier as “the pre-Vatican II generation.”


Although I was not a Catholic, that is the age bracket I am in and that was the Catholic Church I grew up knowing only a little bit about.


I finished my undergraduate theology degree in 1962. Since it was a Baptist seminary I attended, there was not a lot of study about Catholics. But of course there was some—and much of what I learned was very soon out of date.


As indicated above, the Second Vatican Council, often called Vatican II, began in 1962 and ended fifty years ago this week, on December 8, 1965. 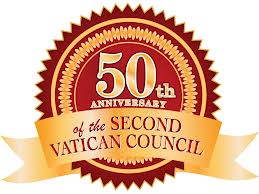 Many significant changes were made in the Catholic Church at that Council. Consequently, much of what I had learned by 1962 about contemporary Catholic faith and practice was out of date by 1965.


Vatican II was the 21st so-called Ecumenical Council of the Roman Catholic Church, and the first one since Vatican I in 1869-70. It was called by John XXIII, the remarkable Pope who was canonized in April of last year. Already 76 years old when he was elected Pope in October 1958, he surprised most people, who expected him to be nothing more than a “caretaker pope.”


One of the most significant changes made at Vatican II was the position of the Catholic Church’s relationship to non-Catholic Christians as well as its relationships with other religious faiths. The “Decree on Ecumenism” was passed in late 1964, more than a year after Pope John had died (in June 1963), but it was very much in keeping with his stated desire.


That Decree declared that other Christians were “separated brethren,” a remarkable shift from prior church teaching that regarded them (us Protestants) as “heretics.”


Vatican II also greatly changed the relationship between the Catholic Church and Jews. The “Declaration on the Relation of the Church with Non-Christian Religions” was passed in October 1965, about six weeks before the close of Vatican II.


The fourth part of that Declaration speaks of the bond that ties the people of the “New Covenant”' (Christians) to Abraham’s stock (Jews).


It states that even though some Jewish authorities and those who followed them called for Jesus’s death, the blame for this cannot be laid at the door of all those Jews present at that time, nor can the Jews in our time be held as guilty.


Accordingly, the Jews “should not be presented as rejected or accursed by God.”


The Declaration also decries all displays of antisemitism made at any time by anyone. This repudiated the abuse heaped on Jewish people through the years because they were considered “Christ killers.”


There were also many changes in Catholic worship and practice. For example, there was a new emphasis on lay people reading the Bible. Also, Mass began to be conducted with the priest facing the congregation, and the language spoken by the congregants was used in worship rather than Latin.


Of course some things didn’t change, to the disappointment of some of the more progressive clergy and lay people: priests still couldn’t marry, women still couldn’t become priests, and contraceptives continued to be banned.


Some Catholics are now hoping Pope Francis will call for “Vatican III,” but that is not likely to happen.


But thank God for Vatican II!
Posted by LKSeat at 5:28 AM