In the summer of 1959 June and I moved from our beloved state of Missouri to Kentucky. We spent seven years there and came to love Kentucky as our second “home state.” In addition to being a full-time seminary student I was also a pastor during most of that time, and I still have good memories and great respect for many of the Kentuckians in our churches.
Perhaps because of that past connection, I was especially interested in the gubernatorial election in Kentucky last month. That highly contested election had ramifications beyond Kentucky: it may have even been a harbinger for the presidential election next year.
Businessman Matt Bevin was elected as the new Kentucky governor. I have mixed emotions, however, about Bevin (b. 1967), who will be inaugurated on this coming Tuesday, December 8. 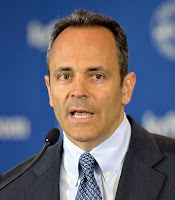 On the one hand, Bevin seems to be a dedicated Christian layman. He is also a dedicated family man: he and his wife have nine children, including four from Ethiopia whom they adopted.

Their oldest child, Brittiney, was killed in a car accident in 2003 on Lexington Road near the Southern Baptist Theological Seminary (SBTS) about a month before her 18th birthday. (I used to drive down that road several times a week.)
Brittiney had wanted to be a missionary, so her parents provided an endowment in her memory to fund a facility at SBTS “for the advancement of the gospel amongst the nation and nations.” It opened in the fall of 2012. As one who went to seminary in order to become a missionary, the establishment of the Bevin Center for Missions Mobilization is something I have to evaluate highly.
But there are aspects of Bevin’s words and actions that are troubling. Supported by the Tea Party, he ran in the 2014 primary election against Sen. Mitch McConnell, whom he considered too liberal. Bevin lost that election, but then the Tea Party successfully promoted his gubernatorial campaign.
One of his main appeals during his campaign for governor was his pledge to cut the state’s Medicaid program and close the state-run Kynect health insurance exchange. After the election he tempered his rhetoric somewhat, but Bevin’s election was not good news for the poorest people of Kentucky who have been greatly helped by “Obamacare.”
As one who agrees with the Tea Party, Bevin opposes all tax increases and wants to decrease spending for the needy in the state.
That seems highly questionable for a man whose net worth is widely estimated as being between $13.4 million and $54.9 million, who lives in a house costing over $700,000, and who pays more in tuition for his children to attend a private Christian school than the yearly income of many of the families in the state of Kentucky.
Bevin has also said that when he becomes governor on Dec. 8 he will call for barring Syrian refugees from settling in Kentucky.
By contrast, Steve Beshear, Kentucky’s current governor, has said that Kentucky should do “the Christian thing” and welcome all refugees who have passed extensive background checks.
It seems to me that Gov. Beshear is right, and I wonder how “good” Christians like Bevin, many other Republican governors, and some presidential candidates can be so harsh in their rejection of Syrian refugees, many of whom are terrified children.
Moreover, does the election of a businessman who has never held public office to be the governor of Kentucky mean the same sort of thing might happen in the presidential election next year?
Perhaps. But I certainly hope not, for the sake of our nation.
Posted by LKSeat at 5:26 AM