The Fellowship of Reconciliation (FOR) is celebrating its 100th anniversary this week in New York City. 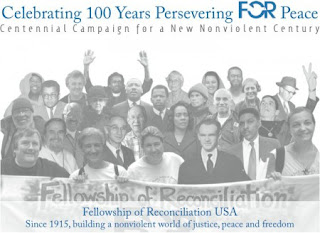 FOR was launched as the result of a pact made by two Christians in August 1914, at the outset of the First World War. The two men, an English Quaker and a German Lutheran, had just arrived for a conference of Christian pacifists when hostilities broke out.

Needing to return home immediately, as they were parting on a platform of the railway station in Cologne, Germany, they made this pledge to each other: “We are one in Christ and can never be at war.”
What a difference it would have made in world history if all the Christians in Europe had made that same pledge!
In late December of that year the Englishman, Henry Hodgkin, organized a conference in Cambridge at which 130 Christians of various denominations joined in the founding of the Fellowship of Reconciliation in England.
About a year later, in November 1915, FOR was begun in the United States by sixty-eight pacifists, including Jane Addams, the first woman to win the Nobel Peace Prize, about whom I wrote a few weeks ago.
Another of the organizers in the U.S. was Congregationalist minister A.J. Muste, who later became a Quaker and who served as executive secretary (now titled executive director) of FOR from 1940 to 1953.
One of Muste’s most cited statements is, “There is no way to peace; peace is the way.”
John Swomley served from 1953 to 1960 as FOR’s next executive secretary. In 1960 Swomley became a professor of social ethics at St. Paul’s School of Theology in Kansas City, where he taught until his retirement in 1984.
During those years he was the leader of the local branch of FOR, and in 1976-77 when we were back from Japan for a year and living in Liberty, I attended a few FOR meetings in Kansas City and became acquainted with Swomley and gained a greater appreciation for FOR. 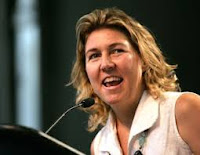 Since 2013 the Executive Director of FOR-USA has been Kristin Stoneking, an ordained United Methodist Church minister.
(Kristin’s father, John Stoneking, was once pastor of Rosedale United Methodist Church in Kansas City, Kansas; the same church building is now the home of Rainbow Mennonite Church where June and I are members.)
From 3 p.m. to 9:30 on Saturday there will be activities at Riverside Church in New York celebrating the 100th anniversary of FOR-USA.
The 75th anniversary in 1990 was also celebrated at Riverside Church with an interfaith service. (Adherents of non-Christian religions have been active participants in FOR for many years.)
Ten years ago, Paul R. Dekar, a seminary professor, authored Creating the Beloved Community: A Journey with the Fellowship of Reconciliation.
In Part I, Dekar describes six ways FOR challenges “the nexus of evil,” including “challenging the making of enemies.”
Dekar writes that FOR members “have sought to see so-called enemies as potential friends.” That statement reminded me of the well-known story about President Lincoln.
During the Civil War, Lincoln was criticized for speaking of benevolent treatment for the Southern rebels. The critic chided Lincoln, reminding him that there was a war going on, that the Confederates were the enemy and so they should be destroyed.
Lincoln’s wise response: “Do I not destroy my enemies when I make them my friends?”
FOR has not succeeded in bringing about reconciliation among all people. There is much yet to do. Still, the world is doubtlessly much better off because of FOR’s meritorious work over the past 100 years.

Happy Birthday, FOR—and best wishes for your next 100 years.