Is Legalized Polygamy Next?


The Bible reading at the first church service June and I attended in Tucson last month (at Shalom Mennonite Fellowship) was Genesis 32:22-32. That passage begins, “Jacob got up during the night, took his two wives, his two women servants, and his eleven sons, and crossed the Jabbok River’s shallow water.”

Those verses go on to tell how Jacob had his name changed to Israel. Thus, he became the patriarch of “the children of Israel” in the Old Testament—and the progenitor of the modern nation of Israel.
Conservative Christians, among others, are strong supporters and defenders of modern Israel, for they are considered the people uniquely chosen by God. 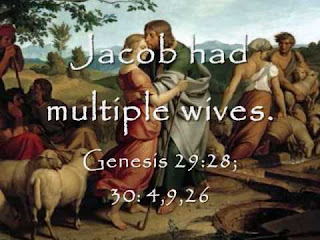 But what about Jacob’s (Israel’s) two wives and two “women servants” who also bore him children?
Since, as is claimed, Jacob/Israel was especially chosen by God, along with the twelve tribes of Israel (descendants of Jacob’s/Israel’s sons born by his four wives/servants), is this not ample biblical justification for polygamy?
So, can’t the Old Testament be legitimately used to support legalization of polygamy?
Moreover, doesn’t the recent Supreme Court decision legalizing same-sex marriage suggest that the legalization of polygamy may be coming down the pike?
The Southern Baptist Theological Seminary President Albert Mohler has just authored a new book, published late last month. Under the title “We Cannot Be Silent,” Mohler writes how it is imperative for Christians to speak out against same-sex marriage and other related LBGT issues.
In the second chapter of his book Mohler writes:

Once marriage can mean anything other than a heterosexual union, it can and must eventually mean everything—from polygamy to any number of other deviations from traditional marriage (p. 31).

In commenting on observations made by Chief Justice Roberts concerning the recent legalizing of same-sex marriage by the SCOTUS, Mohler contends that that decision “opens wide a door that basically invites looming demands for the legalization of polygamy and polyamory” (p. 181).
He also avers, “You can count on the fact that advocates for legalized polygamy found great encouragement in this decision” (ibid.).
It seems a bit odd, however, for someone who because of his literal interpretation of the Bible takes such a strong stance against same-sex marriage and full acceptance of LGBT to be so strongly opposed to polygamy.
At the top of the home page of their website, BiblicalPolygamy.com says that they are, “A resource for proving that Polygamy really IS Biblical.” And Jacob, “father of the twelve patriarchs of the tribes of Israel,” is given as one of the prime examples of “polygamists in the Bible.”
The Old Testament argument for polygamy is far stronger than the argument of Mohler and others against same-sex marriage. Other than being related to sex, there is little similarity between being a gay/lesbian and choosing to be in a polygamist relationship.
Homosexuality (in distinction from some homosexual activity) seems clearly to be an innate orientation, a way some people are “hardwired.”
But while there may be strong sexual drives toward having multiple wives (or husbands, in some cases)—just as there are such drives for some, evidently, toward engaging in adultery or pedophilia—there is no way polygamy can be considered an innate orientation.
As I wrote a year and a half ago in a prior article about this subject (here), I am not in the least advocating polygamy. But I do think there is far more biblical support for polygamy than there is for opposition to sexual relations between same-sex adults.
And the legalization of the latter in no way leads logically to the legalization of polygamy.
Posted by LKSeat at 6:36 AM