The pun is intended, but the man who is now a Franciscan priest, prolific author, and wise teacher was named Richard when he was born in Kansas in 1943, the first son of Richard and Eleanore Rohr. The way he writes and speaks, though, is more like a reassuring purr than a roar.
Although I don’t agree with some of his Catholic beliefs and don’t find some of what he writes particularly helpful, on the whole I have found in recent years that Rohr is, indeed, a wise teacher and someone worth listening to. 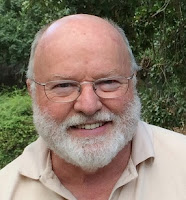 On our way to Tucson the last of September, June and I made a brief visit to the Center for Action and Contemplation (CAC) in Albuquerque. That is a rather modest facility for the organization that Rohr founded in 1986, and it has been the hub of his activities for nearly 30 years now.
As expected, we didn’t get to meet Rohr. It was meaningful, though, to spend some time in the Visitor Center and to talk with the woman who worked there.
We also walked the Labyrinth of the Dancing Christ. CAC issues this invitation to their guests: “Walk the seven circuits slowly, circling inward to rest at the center in Presence. As you circle outward, carry with you the awareness of union with all in the Divine.”
I don’t know if we got the full benefit, but we found it meaningful to slowly walk in and out of the labyrinth.
A few days ago I finished reading Rohr’s 2009 book The Naked Now: Learning to See as the Mystics See. It is a fine book that needs to be read slowly and thought about deeply. Throughout, Rohr calls for religious growth.
Rohr states, “Transformation into love is the heart of religious conversion.” He also says that mature religion involves “letting ourselves be changed by a mysterious encounter with grace, mercy, and forgiveness” (pp. 87-88).
He goes on to say, many of those who have negative views toward religion are “right in what they are suspicious of, which is usually the immature form of religion, a form that is largely dominant today” (p. 120).
Now I am all set to start reading Rohr’s book Preparing for Christmas: Daily Meditations for Advent.
Although I don’t remember anything ever being said about Advent at the Baptist church that I attended weekly as a boy, for many years now I have belonged to churches where Advent is observed.
In recent years I have also often read daily devotions during the days of Advent. This year I will be listening to Richard Rohr each day from this coming Sunday, the beginning of Advent, until Christmas.
To this point I have read only the Introduction in Rohr’s Advent book. He says there that Christmas is more than “the sweet coming of a baby” and that the Word of God “confronts, converts, and consoles us—in that order. The suffering, injustice and devastation on this planet are too great now to settle for any infantile gospel or any infantile Jesus.”
Noteworthy words!
Posted by LKSeat at 6:25 AM