For years I have had a small jar of Mentholatum beside my bed each night. Previously, I used Vicks VapoRub to ease nasal congestion and to help relieve more serious problems such as a sore throat or a nagging cough.
After hearing about Mentholatum in Japan, though, I began to use it rather than Vicks and have continued to do so.
“Mentholatum Ointment” was first marketed in 1894 by A. A. Hyde and the manufacturing company he founded five years earlier in Wichita, Kansas. (A book titled Amazing Mentholatum by Alex Taylor, the great-grandson of Hyde, was published in 2006.) 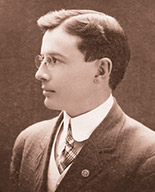 A young American man who was born in Leavenworth, Kansas, introduced Mentholatum to Japan. His name was William Merrell Vories, and he was born 135 years ago, on October 28, 1880.
As a young man, William sailed for Japan as a lay missionary. That was in 1905, the year the Russo-Japanese War ended, as I wrote about recently.
Probably his hearing talk about that war is reflected in “Let There Be Light,” a hymn that he wrote in 1908. The last stanza of that hymn is a prayer:


Let woe and waste of warfare cease, / That useful labor yet may build / Its homes with love and laughter filled / God give thy wayward children peace.

(I was surprised, and happy, when Vories’s hymn was sung in a worship service this month at the Shalom Mennonite Fellowship here in Tucson, Ariz., where June and I are spending a couple of months.)
Vories first got a job teaching English in a prefectural school (in Shiga Prefecture in central Japan). The new American teacher became very popular with his students.
Soon after arriving in Omihachiman (in Shiga), he met a Japanese Christian and together they started Bible classes after school, meeting at the house provided for Vories. There were from 40 to 100 students who attended each class.
But at that time there was strong prejudice against Christians in this region of Japan. Consequently, in 1907 the school refused to renew Vories’s teaching contract because of the success of his Bible classes.
“I was shocked as if my head was knocked by an iron bar,” Vories wrote after losing his teaching job.
But the next year, in 1908, he established an architectural office, Vories & Co. which over the next 35 years designed around 1600 buildings including churches, schools, hotels and private houses.
(The first permanent building on the campus of Seinan Gakuin (pictured), where I taught from 1968 to 2004, was designed by the Vories Company.) 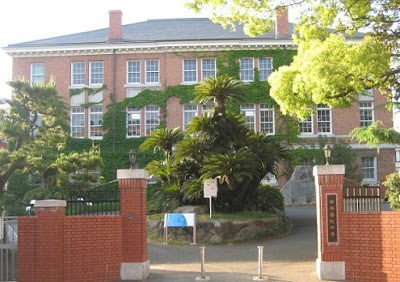 In 1919 Vories married Hitotsuyanagi Mariko (family name first as is customary in Japan). Many years later, early in 1941, he became a naturalized Japanese citizen, taking the name Hitotsuyanagi Mereru.
Perhaps needing more money to support his new wife as well as his missionary activity, in 1920 Vories acquired the rights to sell Mentholatum products in Japan. A special label was placed on every jar of the ointment inviting users to participate in a Bible correspondence course.
So it was that many Japanese began to call Mentholatum the “Jesus medicine.” 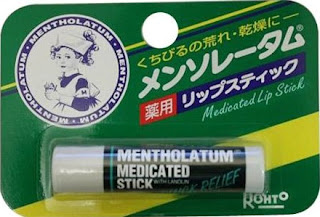 Mentholatum was widely sold in Japan up to the time of Vories’s death in 1964 at the age of 83—and since. In 1988 Rohto, the giant Japanese pharmaceutical company based in Osaka, acquired the management rights to the Mentholatum Company.
While the appeal for enrolling in Bible classes was dropped from Mentholatum jars long ago, there are still many who remember the story of when the ointment was popularly known as ‘Jesus medicine” in Japan.
Posted by LKSeat at 6:43 AM