“Jesus was a Refugee”: An Irrelevant Argument

The massive right-wing opposition to the U.S. receiving Syrian refugees is deplorable, and those speaking out in favor of showing compassion for such refugees are to be commended. It is also praiseworthy that many of the latter are Christians, even though there are plenty of conservative Christians on the other side.
However, the use of “Jesus was a refugee” memes is of dubious value in promoting acceptance of Syrian refugees. Jesus and his parents were not from a country that posed a terrorist threat to Egypt, nor were they among tens of thousands who were seeking refuge in Egypt.
There are plenty of Christian motives for helping the Syrian refugees, though, the primary one being neighbor-love. Reaching out in compassion to those needing help is to be faithful to the teaching of Jesus. Shouldn’t it be far more effective to stress that teaching rather than talking about Jesus being a refugee? 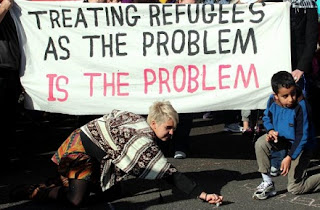 The fears of the conservatives need to be taken seriously, and making fun of their xenophobia will have little positive value. The terrorist activity of ISIS and Al-Qaeda has been atrocious, and we certainly don’t want people associated with them or other similarly heinous groups to enter our country.
But rather than trying to shame people wanting to reject Syrian refugees by pointing out that Jesus was a refugee, it would surely be more effective to help people understand how difficult and time consuming it is for refugees, especially those from Syria and other Near Eastern countries, to get permission to reside in this country.
It would be far easier, and much quicker, for terrorists to enter the country on a tourist visa (perhaps with a counterfeit passport) than to locate here as a refugee. Here is how a recent article puts it:

Non-refugees have carried out all terrorist attacks over the past 35 years. That means they used other means to arrive in the U.S. All of the 9/11 hijackers used student or tourist visas. These visas are much easier and faster to obtain than refugee status, which takes up to two years and requires a multi-stage vetting process and U.N. referral. Refugee status is the single most difficult way to come to the U.S. It makes no sense for a terrorist to try to use the resettlement process for an attack.

The article cited is titled “Six Reasons to Welcome Syrian Refugees After Paris,” and it is worth reading in its entirety. (It surprising that this is on the website of the libertarian Niskanen Center, named after William (Bill) Niskanen, who served from 1985 to 2008 as chairman of the Cato Institute founded by Charles Koch.)
One can’t help but think that much of the anti-refugee rhetoric and action is primarily because of anti-Obama sentiment. Still, the statements by Republican governors, and other GOP leaders, tend to have considerable influence upon conservative Christians, especially in the South.
But, thankfully, some conservative Christians have spoken up in favor of compassionate acceptance of refugees. Among them are Russell Moore (in this 11/19 Washington Post article), with whom I have disagreed in previous blog articles. (For example, see this link.)
Yes, there are plenty of reasons why we in the U.S. should be compassion toward, and accepting of, Syrian refugees. Pointing out that Jesus was a refugee is not one of them.
Posted by LKSeat at 10:38 AM