Another Good Candidate for the New $10 Bill

A couple of months ago I suggested (here) that Jane Addams would be a good choice for the new $10 bill, which will have a woman’s picture on it. This article is about another woman who is also a strong candidate for the proposed new bill to be released in 2020.
Elizabeth Cady Stanton was an outstanding 19th-century woman who perhaps is not widely known today. But she was a woman of considerable ability and significance, so she certainly would not be a bad choice for the woman to appear on the new $10 bill.
Elizabeth Cady was born 200 years ago this week, on November 12, 1815. She died in 1902, less than three weeks before her 87th birthday. Her autobiography, Eighty Years and More, was published five years before her death and tells much about her remarkable life.
At the time of her birth, Elizabeth’s father, a lawyer in New York, was a member of the U.S. House of Representatives. As a young woman, discussing legal matters with her father and reading his law books caused Elizabeth to realize how disproportionately the law favored men over women—and particularly over married women.
Seeking to change such laws became one of her main goals in life.
In 1840, Elizabeth married Henry Stanton, a journalist who later studied law under his father-in-law and who also became a lawyer. The Stantons became the parents of seven children between 1842 and 1859.
In spite of having a large family—and she seems to have been a good mother—Elizabeth Stanton spent much of her life working for social causes. She was an abolitionist and also a very active member of the temperance movement, working against what she saw as the evils of alcohol.
But she became best known as a leader in the women’s suffrage movement. 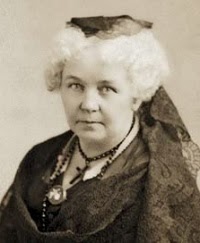 She was the main author of “Declaration of Sentiments,” a document presented to that convention. It includes these words, “We hold these truths to be self-evident: that all men and women are created equal” (emphasis added).
Elizabeth met Susan B. Anthony in 1851, and they became lifelong friends and staunch colleagues in the women’s movement. (Anthony might be even a stronger candidate than Stanton for the new $10 bill, but her image already appears on the little-used one dollar coin, first minted in 1979.)
The Woman’s Bible is a two-part book written by Elizabeth and a committee of 26 women. The first volume was published in 1895, the year Elizabeth turned 80, and the second volume in 1898. It was written mainly to challenge the traditional position of religious orthodoxy that women should be subservient to men.
Elizabeth wrote the first essay, which was about Genesis 1:26-28. Her conclusion: “The above texts plainly show the simultaneous creation of man and woman, and their equal importance in the development of the race” (p. 8).
To this day most people seem to emphasize the second chapter of Genesis, where Eve is created from Adam’s rib and considered his “helpmeet” (from a misunderstanding of Genesis 2:20).
What a shame that so many today do not have as good an understanding of the Bible as Elizabeth Cady Stanton had 120 years ago!
Posted by LKSeat at 5:42 AM