What about the Benedict Option?

Have you heard of “the Benedict Option”? It has been emphasized for years by Rod Dreher, and his new book, The Benedict Option: A Strategy for Christians in a Post-Christian Nation, was just published on March 14. On that very day, David Brooks wrote in the New York Times that Dreher’s work was “already the most discussed and most important religious book of the decade.”

THE AUTHOR OF THE BENEDICT OPTION
Rod Dreher (b. 1967) is an interesting guy. He is a senior editor and prolific blogger at The American Conservative (TAC), a bi-monthly journal co-founded by Pat Buchanan. According to their website, Dreher is one of eight, all white men, on the TAC “team.”

Dreher was raised as a nominal Methodist, but he converted to Catholicism at age 26. In 2006 he converted again, this time to Eastern Orthodox Christianity. His views on Christianity are as conservative as his social and political views.

Although his only university degree is a BA in journalism (from LSU in his home state of Louisiana), Dreher seems to be well-read. His emphasis on the Benedict Option (BenOp) comes from Scottish philosopher Alasdair MacIntyre’s influential book After Virtue (1981).

To a large extent, Dreher seems to be a pessimist—or an alarmist. For example, he thinks the world now is “growing ever more hostile” toward true Christians (p. 2). “Progressives, he writes, “sneer at claims of anti-Christian discrimination or persecution.” But, he warns his readers, “Don’t you believe them” (p. 179). 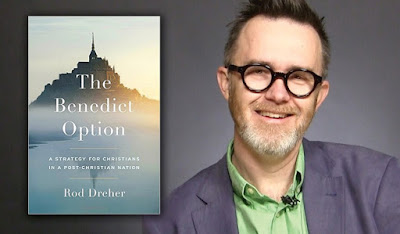 THE GIST OF THE BENEDICT OPTION
Dreher’s main point is fairly simple: Christians who wish to maintain their faith (and that of their children) must separate from mainstream society and try to live in intentional communities—although not necessarily “in the hills.” This is not just for their own sake, but also for the future of the Christian faith.

Benedict of Nursia (480-547), for whom the BenOp is named, is known as the father of medieval monasticism, which, in turn, has been heralded as the “preserver of Western civilization.” If not completely in the same way, Dreher is calling Christians today to the same task: withdrawal from the dominant culture in order to help preserve traditional Christianity.

As a true conservative, in the primary sense of that term, Dreher sees the BenOp as a needed strategy for conserving or preserving the true faith, keeping it from not only from being swallowed up by secular society but also from being perverted by liberal “Christians.”

A BRIEF EVALUATION OF THE BENEDICT OPTION
I first became aware of the BenOp when I read the Winter 2017 issue of Plough, the quarterly publication of the Bruderhof. (See here for what I wrote about Plough elsewhere.) I was both attracted and repelled by what I read.

As a committed Anabaptist Christian, I agree with Ted Grimsrud, a notable Mennonite theologian, who wrote a long (29 pages!) four-part blog article about the BenOp: “I believe that Christians should always think in terms of living in countercultural communities and having a countercultural sensibility.”

I also agree with Dreher’s strong rejection of the consumerism and hedonism rampant in Western society.

My main disagreement, though, is with regard to what he says about gay rights. Throughout much of the book (e.g., see pp. 179ff.) Dreher seems to assert that being Christian clearly means being anti-gay.

According to Dreher’s analysis, the present discrimination against or persecution of Christians—harsh treatment most likely to grow stronger in the future—is (or will be) primarily because of their refusal to countenance the full equality of gays/lesbians in society.

This aspect of the Benedict Option, however, which denies some people’s civil rights, is certainly neither good nor necessary.