The break-in at the Democratic National Committee headquarters in the Watergate office complex in Washington, D.C., occurred 45 years ago (in June 1972). As virtually everyone knows, repercussions of that single event led to President Nixon resigning in August 1974, prior to almost certain impeachment and removal from office.
THE WATERGATE COVER-UP
As is widely recognized, it was not the Watergate break-in itself that led to Nixon’s resignation. Rather, it was his attempt to cover-up that ultimately did him in. Barry Sassman was city news editor at The Washington Post during those years, and he called it “the great coverup”.
Sassman (b. 1934) authored The Great Coverup: Nixon and the Scandal of Watergate. It was named by the New York Times as one of the best books of 1974.
In that highly-regarded work, the author wrote, “It is sobering to realize just how reluctant Congress, including Democrats as well as Republicans, was to take action against the President. Congress acted only when an outraged public demanded it” (p. 298)
The impeachment process against Nixon wasn’t formally initiated until February 1974. On Feb. 6 the House passed a resolution giving its Judiciary Committee authority to investigate whether sufficient grounds existed to impeach the President primarily because of the Watergate scandal.
That investigation wasn't undertaken until a whole year after the Senate established a select committee to investigate the Watergate break-in and of the Nixon Administration’s attempted cover-up of its involvement.
Impeachment is a long, drawn-out process.
IS THERE A RUSSIA COVER-UP?
Are there parallels between the actions of the Pres. Nixon and the current POTUS? There certainly seem to be some parallels, but at this point we don’t know to what extent.
Ironically, Pres. Trump tried to make a parallel between his predecessor and Nixon. On March 4, DJT tweeted, “How low has President Obama gone to tapp [sic] my phones during the very sacred election process. This is Nixon/Watergate. Bad (or sick) guy!”
There has been no evidence found to support Trump’s charges—but there has been growing suspicion that he may be trying to cover up his connections with Russia and Russia’s influence on the 2016 election.
During his May 10 monologue, late-night comedian Jimmy Kimmel remarked, “When we said Trump should act more presidential, we probably should have specified–we didn’t mean Nixon.” This was the day following Trump’s sacking of FBI Director James Comey, who was overseeing the FBI probe into Russian election meddling. 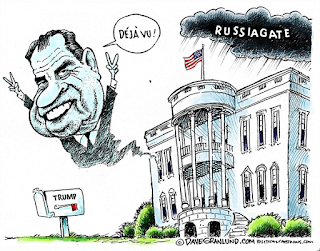 IS THERE A CASE FOR IMPEACHMENT?

The second chapter of Allan J. Lichtman’s book The Case for Impeachment (April 2017) is “The Resignation of Richard Nixon: A Warning to Donald Trump.”
Lichtman (b. 1947) is a Distinguished Professor of History at American University in Washington, D.C. He gained considerable notice last year when he predicted that Trump would win the presidential election—in spite of all the polls suggesting otherwise. What made that prediction noteworthy was the fact that he had correctly predicted every winner of the Oval Office since 1984.
In the second chapter of his book, Lichtman points out that “Donald Trump exhibits the same tendencies that led Nixon to violate the most basic standards of morality and threaten the foundations of our democracy” (p. 21).
On May 12 Lichtman talked to Newsweek about Trump’s sudden firing of Comey. “The only parallel is Watergate, and this is much more serious,” Lichtman said. “What Trump is involved in is more serious because it involves a foreign power and the national security of the country.”
Is it now time for an outraged public, Republicans as well as Democrats, to speak up again as they did in 1974?