Political cartoons have had a long and venerable history in the U.S.—but are they helpful for spurring private thought and civil public debate, or are they divisive and promoters of increased polarization in society?

POLITICAL CARTOONISTS I HAVE KNOWN
I have long enjoyed political cartoons. During the nearly seven years we lived in Kentucky, June and I enjoyed a great many of Hugh Haynie’s cartoons that appeared regularly in Louisville’s daily newspaper.
Haynie (1927-99) drew for The Courier-Journal from 1958 to1996. Here is one of his cartoons, showing LBJ’s opposition to the media: 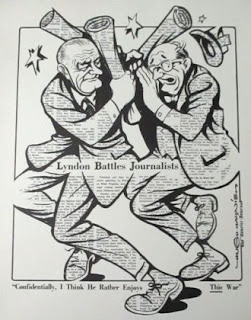 After settling into our retirement home in Missouri in 2005, we have regularly enjoyed great cartoons by Lee Judge in the Kansas City Star. Here is one of his cartoons from 2014. 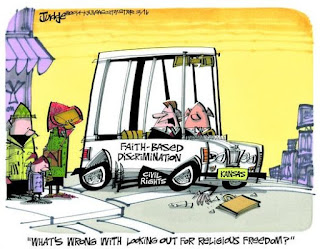 In recent years I have also regularly read the Washington Post online and have enjoyed the outstanding political cartoons of Tom Toles. Here is one of my favorites: 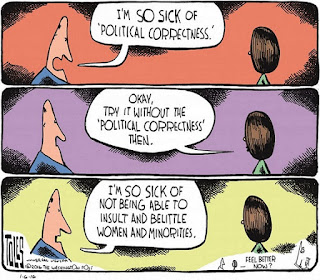 And here is a rather powerful cartoon that I saw just last week in the National Catholic Reporter; it is by Stuart Carlson, a cartoonist I don’t remember seeing before:

If a picture is worth a thousand words, as it is often said, a political cartoon (with just a few words) must be worth at least two thousand words—or more.

THE FATHER OF POLITICAL CARTOONS
Thomas Nast (1840-1902) was one of the first and most influential political cartoonists in the United States. Recently I have read some of two fascinating books about him: Thomas Nast: The Father of Modern Political Cartoons (2013) by Fiona Deans Halloran and Thomas Nast: America’s Greatest Political Cartoonist (2014) by Jay G. Williams.
I first became aware of Nast years ago when working on a talk or article about Santa Claus. Beginning in the 1860s, Nast’s cartoons about Santa shaped the nation’s image of the “jolly old elf.”
Nast is also credited for being the first to use an elephant to portray the Republican Party, and he also popularized the donkey (or jackass) to symbolize the Democratic Party.
Through the years Nast’s cartoons appeared mostly in Harper’s Weekly, which in 1861 had a readership of 120,000 and remained above 100,000 throughout the war years.
It was during the Civil War that Nast’s cartoons were especially influential. On September 3, 1864, his cartoon “Compromise with the South” appeared in Harper’s Weekly. 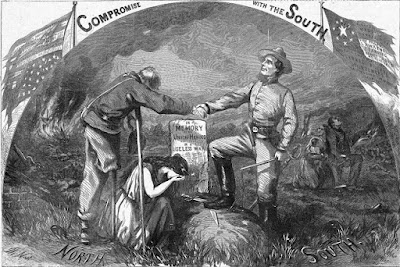 As noted in HarpWeek.com, Nast’s message is clear: “If compromise with the Confederacy is pursued, then Union servicemen will have sacrificed their limbs and lives in vain, and black Americans will be returned to slavery.”
Many of Nast’s cartoons in later years were strongly against politicians he opposed. Many were so strong it some people even thought that the word nasty was derived from the name of the hard-hitting cartoonist.
Some of his most severe criticism targeted “Boss” Tweed of New York. Regarding Nast’s cartoons, Tweed reportedly said, “Stop them damned pictures. I don't care so much what the papers say about me. My constituents don't know how to read, but they can't help seeing them damned pictures!”

THE PROBLEM WITH POLITICAL CARTOONS
Interesting as they may be, I wonder if political cartoons may often be harmful to civil public discourse. We tend to like those cartoons with which we agree and dislike those with which we disagree. Thus, I like most of Judge’s and Toles’s cartoons, but very much dislike most of those (few) I see by Glenn McCoy, such as: 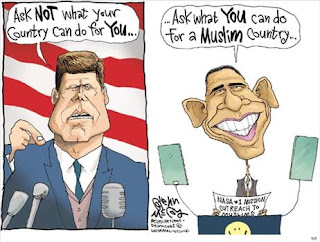 So, are political cartoons generally helpful as a means of spurring deeper thought and civil public debate—or are they mainly harmful, promoting greater divisiveness and polarization?
What do you think?
Posted by LKSeat at 5:28 AM