Although largely unknown, May 15 each year is observed by some people/groups as International Conscientious Objection Day (CO Day). So, this past Monday was a day honoring those who have resisted and those who continue to resist war.
THE ANABAPTIST TRADITION
The oldest consistent emphasis upon pacifism, non-violence, and non-participation in war is in the Anabaptist tradition, which started with the “Swiss Brethren” of Zurich, Switzerland, in 1525.
That tradition has been carried on mostly by the Mennonites, the followers of Menno Simons. He was a Dutch priest who was re-baptized and left the Catholic Church in 1536. Even a few years earlier Jakob Hutter became the leader of a smaller group that came to be known as the Hutterites.
In the late 1600s, Jakob Amman led a conservative breakaway from the main Anabaptist communities in Europe, and his followers came to be known as the Amish.
One primary commonality among these three groups was/is their pacifism and resistance to violence, based on their commitment to love of enemies as Jesus commanded. Through the years adherents in all three groups have known the story of Dirk Willems, who was imprisoned in the Netherlands for his Anabaptist beliefs.
During that winter, Willems was able to escape—but his absence was soon discovered and he was quickly chased by a guard. Willems ran across the frozen moat, but his heavier pursuer broke through the ice. Willems turned back and saved the man’s life—but then was re-captured. On May 16, 1569, he was burned at the stake. 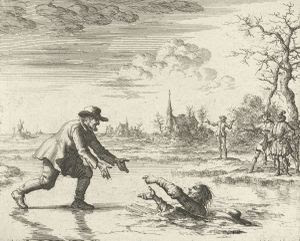 
Even though there was a long history of pacifism among Anabaptist Christians, there was no provision for conscientious objectors during World War I. As a result, two Hutterites who were committed to absolute pacifism became martyrs in 1918. (If you don’t know their tragic story, or would like to review it, click here to see my 11/30/14 blog article about them.)
Since 1935, three church groups have been termed historic peace churches. Those three are the Mennonites (including the Amish), the Religious Society of Friends (Quakers), and Church of the Brethren. During World War II, and since, members of those churches have been able to register as conscientious objectors and to be exempted from direct involvement in wartime violence.
It has not been so easy for people who were not members of a historic peace church or who objected only to a specific war—such as the war in Vietnam. (For more about this matter, see here for Thinking Friend Tom Nowlin’s lengthy and informative comments on my May 10 blog article.)
CARRYING ON THE CO TRADITION
Conscientious objectors (COs) have been active in countries other than the U.S. In fact, Peace Pledge Union (see here), a secular British group, and War Resisters International (click here) are leaders in the observance of International Conscientious Objectors Day.
This CO declaration appears on the latter’s website:

War is a crime against humanity. I am therefore determined not to support any kind of war, and to strive for the removal of all causes of war.

That is the sentiment behind the CO tradition—and it will continue to be emphasized this year.
On October 19-22, 2017, there will be a symposium on resistance and conscientious objection during WWI at the National World War I Museum and Memorial in Kansas City. The theme is “Remembering Muted Voices: Conscience, Dissent, Resistance and Civil Liberties in World War I Through Today.” (For more information, click here.)
My church (Rainbow Mennonite Church) is supporting that symposium and will be displaying in our fellowship hall some of the materials from the symposium for a few days following its completion.