In Memory of the Hutterite Martyrs of 1918

As was commemorated earlier this month, World War I, which began 100 years ago this past summer, officially ended on November 11, 1918. But it didn’t come to an end then for four Hutterite men from South Dakota.
David, Michael and Joseph Hofer, three brothers, and Jacob Wipf, Joseph’s brother-in-law, were inducted into the U.S. army in May 1918 and sent to Washington State.
Upon reaching Camp Lewis there, the four Hutterites, who in allegiance to the Anabaptist tradition were stanch pacifists, refused to don military uniforms or follow other orders.
Consequently, they were court-martialed, tried and convicted, and then in June sent to solitary confinement in the dungeon of Alcatraz.
Three days after the war ended in November, the four men were sent by train to Fort Leavenworth in Kansas. There on Nov. 29 Joseph Hofer died at the age of 24, and on Dec. 2 his 25-year-old brother Michael also died.
The cause of death for the two brothers was listed as pneumonia. It may have actually been the “Spanish flu,” which was so deadly in 1918-19.
But malnutrition and their weakened physical condition due to the torturous treatment they received at Alcatraz were, doubtlessly, the main reason for their untimely deaths.
David Hofer, the oldest brother, was released from prison the next day, but Jacob Wipf was held until April 13, 1919. From his hospital bed in Dec. 1918, Jacob shared the story of the shameful treatment the four Hutterites received; that disconcerting story can be read here.
The complete, sad narrative of the Hutterite martyrs is engagingly told by Duane C. S. Stoltzfus in his book “Pacifists in Chains: The Persecution of Hutterites during the Great War” (2013). (Stoltzfus, b. 1959, is a professor of communication at Goshen College, a Mennonite institution in Indiana.)
Part of the indignity of the situation is depicted by Stoltzfus on pages 173-4 of his book. After Joseph Hofer died, the guards said that family members could not see him. But Maria, Joseph’s wife persisted, and was finally granted permission to see her husband’s body. Stoltzfus writes,

With tears in her eyes, she approached the coffin, which was set on two chairs. When the lid was opened, she found Joseph in death dressed in a military uniform that he had steadfastly refused to wear in life.

As I wrote in my 5/30/12 blog article, in May 2012 June and I visited some Hutterites in South Dakota. Norman Hofer, a relative of the Hofer brothers mentioned above (but not a Hutterite), was our most gracious host/guide.
(On page xvii of his book, author Stoltzfus thanks Norman Hofer for sending him materials and for taking him on a tour of several Hutterite colonies.)
Norman told us the touching story of the Hutterite men of South Dakota whose pacifism cost them their lives. He also took us to the cemetery where we saw the grave markers pictured here. 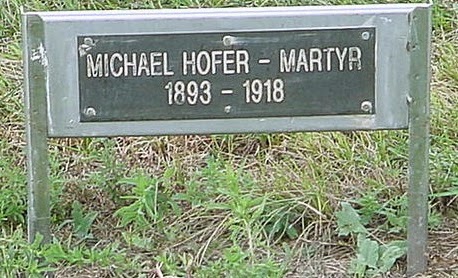 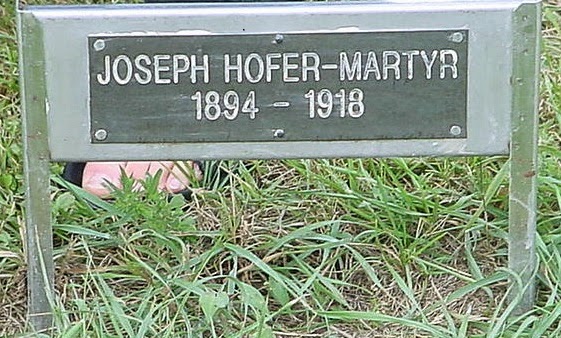 In his opening chapter, Stoltzfus points out that for the Hutterites “there could be no just war.” They took Jesus’s words in Matthew 5 literally, so they “were obligated by their faith to refuse” military service (p. 8).
I am most grateful for the faithful witness of people such as the four Hutterites in 1918, two of whom became martyrs because of the seriousness and fortitude with which they followed the words of Jesus.
Would that all of us Christian believers were as dedicated to the one we call Lord!
Posted by LKSeat at 5:27 AM