From "Just War" to "Just Peace"

New Year’s Day has come and gone and it's already in the fifth day of 2017. But do you know that January 1 was not only New Year’s Day but was also the Catholic Church’s World Day of Peace (WDP)? In fact, this year was the 50th anniversary of the WDP.

For this year’s WDP observance, Pope Francis chose the theme “Nonviolence: A Style of Politics for Peace”.

John Dear, a Catholic priest and peace activist (whom I wrote about here in 2014), has pointed out (here) that the Pope’s message on New Year’s Day was the Catholic Church’s first statement on nonviolence ever made. 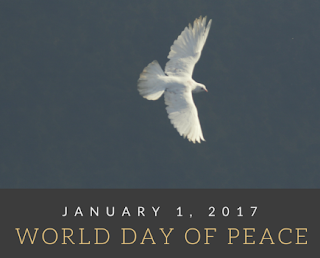 The Pope emphasized, “To be true followers of Jesus today also includes embracing his teaching about nonviolence.” He goes on to state, “The name of God cannot be used to justify violence.” (Click here to see the Pope’s entire message.)
In his WDP message Pope Francis said, “I plead for disarmament and for the prohibition and abolition of nuclear weapons.”
Those important words by the Pope were made public last month about two weeks before the PEOTUS (foolishly? dangerously?) tweeted, “The United States must greatly strengthen and expand its nuclear capability until such time as the world comes to its senses regarding nukes.”
The long “just war” position

The term “just war” was introduced by Augustine of Hippo in his early fifth century book The City of God. It was later articulated in depth by 13th-century theologian Thomas Aquinas. At present, it is outlined by four conditions in the formal Catechism of the Catholic Church.
(See here for a brief statement of “the traditional elements” in what the Catechism calls the “‘just war’ doctrine.”)
A major problem, though, is this: the leaders of every country that is at least somewhat culturally Christian thinks that all wars they engage in are just wars. When have you ever heard the political leader of a Western country admit that their country’s war activities were not just?
When will you ever hear that? My guess is, Never.
In February 1991, then-President Bush sought to assure the American public that his proposed Gulf War conformed to the historic principles of Just War theory.
(It is perhaps noteworthy, however, that Bush II did not use that same language with regard to the Iraq War; although he would never admit it, perhaps he harbored doubts about his presumptive war being just.)
Death kneel for the “just war” doctrine?
There have always been opponents of the just war doctrine. Erasmus of Rotterdam, for example, wrote (in 1508), “The most disadvantageous peace is better than the most just war.”
Now, however, key leaders in the Catholic Church have spoken against it. “Death Knell for Just War: The Vatican’s Historic Turn toward Nonviolence” is the title of John Dear’s article in the Autumn 2016 issue of Plough. (Click here to see that important article.)
(And if you are interested, see this link for an article I wrote last summer about Plough.)
Dear’s article was about the Vatican’s Nonviolence and Just Peace Conference held in April of last year. That seminal meeting issued a document titled “An Appeal to the Catholic Church to Recommit to the Centrality of Gospel Nonviolence.” That appeal included a call for the Church to no longer use or teach “just war theory.”
The Pope seems to have followed that guideline in his World Peace Day message.


My prayer is that all Christians, and others, will heed the recent Catholic call for movement from “just war” to “just peace” and will seek to sanction only nonviolence as the style of politics for peace.
Posted by LKSeat at 5:17 AM