What About Christian Radicalism?

In 1970 a young man, Arthur G. Gish (b. 1939), published a book titled The New Left and Christian Radicalism. It was a slim, but powerful, book.
A couple of years later, another young man (me, b. 1938) read and was greatly influenced by Gish’s book. I have written about it before: the “Amish beard” I have worn since 1972 was partly due to my reading it (see this 2010 blog article.)
ART GISH’S VIEW OF CHRISTIAN RADICALISM
Just this past November, I again made reference to Gish’s book (see here), saying that it was “one of the most influential books I read in the 1970s—or maybe have read in my lifetime.”
The first comment I received on the latter article was from Thinking Friend Phil Rhoads. He wrote, “I wish you could give us a synopsis of Gish's 1970 book referred to.”
Well, I can’t give a full synopsis in this brief article, but I have elsewhere posted a brief summary which you can open with this link. In this article, though, I wish to think more about the meaning and feasibility of “Christian Radicalism.”
Gish’s book has two parts: The first has two chapters: an analysis of the New Left that was active in the U.S. in the 1960s and an explanation of 16th century Anabaptism.
The second part of Gish’s book has three chapters, each of which begins with a striking statement:
To be a Christian is to be a radical (p. 79).
To be a Christian is to be an extremist (p. 94).
To be a Christian is to be a subversive (p. 113).
Radicalism is closely linked to seeking revolution. Thus, Gish’s fifth and last chapter is “A Theology for Revolution”—but it is quite clear that he advocates only non-violent revolution. He is a thoroughgoing pacifist.
I have often quoted Gish’s assertion that “violent revolution is occurring because nonviolent revolution is not occurring” (p. 139). 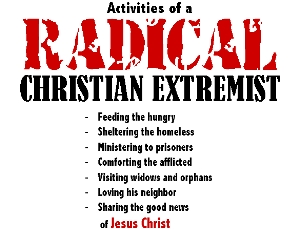 REFLECTING ON GISH’S VIEW
But is revolution along the lines Gish envisions possible in the contemporary world? It certainly didn’t happen in the 1960s or 1970s. And while it was somewhat a different kind of revolution Bernie Sanders and his followers sought last year, the result of the presidential election was just the opposite.
Here are some conclusions I have come to in reflecting upon Gish’s book about Christian radicalism:
(1) It is much easier to have a vision of radical (revolutionary) social change when 30 years old than 40 or more years later (notwithstanding Bernie). Most revolutionaries (peaceful or violent) and radicals (whether Christian or not) have been relatively young.
Jesus began his ministry when 30. Che Guevara’s revolutionary activity started when he was 28. Martin Luther King, Jr., who was born 88 years ago today, first became actively involved in the civil rights movement when he was 26. And so it goes.
(2) The type of revolution brought about by radical Christians, as envisioned by Gish, will be long in coming. It is not going to be a matter of a few years; it will take decades or even centuries. Kent Annan is the author of a new book titled Slow Kingdom Coming, and he makes a valid point: God’s Kingdom is coming, but it is coming very slowly.
(3) The vision of radical Christianity that Gish set forth is an ongoing challenge for all of us who seek to be genuine Christians. It is easy to be drawn into conforming to the surrounding culture. It is easy to grow complacent, lazy, and/or tired. Serious consideration of Gish’s book helps us, still, to see visions and dream dreams (cf. Joel 2:28).