In Praise of Folly

The word “folly” doesn’t have a very good reputation. The Oxford Dictionary defines it as “lack of good sense; foolishness,” or, secondly, as “a foolish act, idea, or practice.”
It is somewhat surprising, then, that a man who has been called one of Europe’s “most famous and influential scholars” of the 16th century is the author of a book titled In Praise of Folly.
Introducing Erasmus
That man, Desiderius Erasmus of Rotterdam (in South Holland), was born around 550 years ago (probably in 1466), and died 480 years ago, in July 1536.
Erasmus is not currently widely known by the general public, but Samuel W. Crompton closes his book Desiderius Erasmus (2004) with this assertion: “Arguably, Erasmus was the greatest intellectual of the sixteenth century—and perhaps of any other” (p. 76)—and Crompton states that Erasmus’ book, written in Latin and sometimes titled The Praise of Folly in English, has been “one of the most widely read books of all human history” (p. 35).
Considering Folly
Erasmus’s brilliant book is multifaceted. It begins with Folly speaking as a woman “dressed in cap and bells to signify her foolishness.” In Crompton’s words, she explains that “the world would not turn, people would not marry, and there would be no future generations of humans were it not for her gift to the world.” 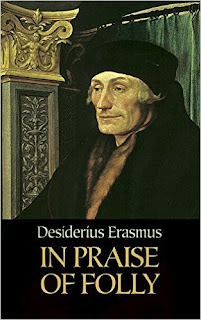 Indeed, “Who would be so rash as to marry if he knew what it might entail, and who would ever allow herself to become pregnant if she could foretell the arduous work ahead” (pp. 35-36).
I certainly can resonate with that. It, perhaps, was because of Folly that June and I married when I was still 18 years old and that our first child was born on my 20th birthday. What foolishness!
Still, I have never for a moment regretted either of those momentous events—so I join with Erasmus in praise of folly.
Much of Erasmus’s book, though, is satire and criticism of the political and religious situation of his day. In this work published in 1511, six years before Luther’s severe questioning of the Catholic Church’s use (sale) of indulgences, Folly spoke out against “the cheat of pardons and indulgences.”
The fourth and last part of the book goes on to take “a quiet, subdued, but unmistakable defense of the Christian faith” (p. 41).
Praising Folly
In that concluding part of his erudite book, Erasmus cites numerous Bible passages which seem to praise folly or foolishness. He especially focuses on Paul’s words in 1 Corinthians, such as “We are fools for Christ's sake” (1 Cor. 4:10; cited at loc. 1233 in the free Kindle version of The Praise of Folly, translated by John Wilson).
(For you who want to explore this theme, I recommend a careful reading of 1 Cor. 1:18-31 and 4:9-13. I also suggest that there is a way to understand the meaning of the cross that is decidedly different from the “evangelical” view that interprets it primarily as Jesus’ penal substitution for sinners.)
It is amazing that a book written over 500 years ago is still in print—and with two Kindle versions published this year! But such is the nature of classics: they continue to speak.
If Erasmus were writing today, my guess is he would castigate the folly of the PEOTUS and his Cabinet picks.
On the other hand, Erasmus would no doubt praise the folly/”foolishness” of those, including many sincere followers of Christ, who are resisting—and will continue to resist—the questionable stances of the coming new Administration in Washington.