Well, the title of this article is a greeting you don’t usually hear, I assume. But on December 15, 1941, President Roosevelt proclaimed that day as Bill of Rights Day, and it has been so designated ever since.
That first Bill of Rights Day, instituted just eight days after the bombing of Pearl Harbor, was on the 150th anniversary of the ratification of the Bill of Rights—and that was 225 years ago today.
The Bill of Rights Ratified
When the U.S. Constitution was approved by Congress in 1787, there were some who were not in favor of its passage. They thought the new Constitution did not adequately guarantee the freedoms or rights of individual citizens. 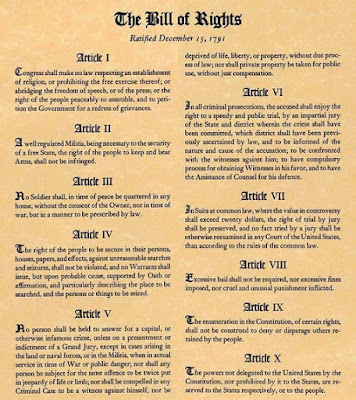 James Madison subsequently drafted twelve amendments to the Constitution. They were passed by Congress in September 1789.
Ten of those amendments were ratified on Dec. 15, 1791, when Virginia ratified them, making the necessary three-fourths of the 13 states to do so. Those ten amendments, as you know, have been popularly known through the years as the Bill of Rights.
The first of the two amendments that were not ratified would have established how members of the House of Representatives would be apportioned to the states, but that matter seems to have been covered adequately in the Constitution itself (see Art. 1, Sec. 2, Para. 3).
The other amendment not approved by 1791 actually became the 27th, and most recent, Amendment, when it was ratified in 1992. It prohibits any law that increases or decreases the salary of members of Congress from taking effect until the start of the next set of terms of office for Representatives.
The Bill of Rights Disputed
After all these years, aspects of the Bill of Rights are discussed, and disputed, almost weekly.


Nearly everyone knows that the First Amendment guarantees freedoms of religion, speech, and the press. It also gives citizens the right to assemble peacefully and to petition the government for changes. But what, specifically, is guaranteed?


For example, are conservative Christians guaranteed the freedom to speak out against homosexuality and gay marriage? Some of them claim their religious liberty is endangered by laws giving LGBTQ people equality and making speaking out against them “hate speech.”


And then what about burning the American flag? On 5:55 a.m. on Nov. 29 PEOTUS Trump tweeted, “Nobody should be allowed to burn the American flag - if they do, there must be consequences - perhaps loss of citizenship or year in jail!”


The Supreme Court, however, has twice (in 1989 and in 1990) affirmed the right to desecrate the American flag as a form of free speech as protected by the First Amendment.


The Second Amendment, of course, has over the past several years been a matter of even more contention. As I have written about that before (see especially this Jan. 2013 article), perhaps there is little reason to write much more about that here.


The words of that Amendment—“A well regulated Militia, being necessary to the security of a free State, the right of the people to keep and bear Arms, shall not be infringed.”—seem straightforward and rather clear (in spite of the questionable use of commas). But as you know, they have been vociferously debated in recent years.
The Bill of Rights Affirmed
In spite of the disputes, which seem largely contrived and unnecessary, the Bill of Rights is a remarkable and praiseworthy part of the U.S. Constitution. All of us citizens of the U.S. should be grateful for the protection of personal freedoms guaranteed by those first 10 Amendments.
So once again I say to you USAmericans, “Happy Bill of Rights Day!”