Four Score and Seven Years Ago: The Great Crash

As almost everyone knows, President Abraham Lincoln began his famous Gettysburg Address, “Four score and seven years ago.” Eighty-seven years before that 1863 speech, of course, was 1776, the (literal) birth of the nation.
What about four score and seven years ago from now? That was 1929—and, as is widely known, “the great crash” of the stock market in the U.S. began that year on October 24, Black Thursday, and more or less ended with Black Tuesday, October 29.


The Great Crash
John Kenneth Galbraith, the eminent economist, authored a book titled The Great Crash: 1929. Originally published in 1955, his book became an instant bestseller. That rather brief (about 200 pages) book by Galbraith (1908-2006) is invaluable for seeking to understand American financial history.
In what is no doubt an exaggeration, Galbraith states that “1928 was the last year in which Americans were buoyant, uninhabited, and utterly happy” (p. 22). There was, admittedly, great satisfaction with the way things were going in the country—and that had implications for the election of 1928.
Roger W. Babson, a leading entrepreneur of the day, proclaimed that “if Smith should be elected with a Democratic Congress we are almost certain to have a resulting business depression in 1929” (cited on p. 15). Partly because of ideas like that, Hoover was elected in a landslide.
It is sometimes said that Al Smith was defeated because he was a Catholic, but that may have been less of a factor than the voters not wanting to jeopardize the economic boom of 1928.
So, Hoover was elected—and the rest, as they say, is history. 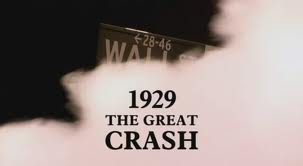 Are things bad now?
It is not surprising that now one of the most common campaign themes of candidate Trump is how bad things are in this country. His appeal to “make America great again” is based on the claim that it is necessary to elect a Republican President to reverse that damage done by President Obama during the last 7½ years.
Republican politicians and their talk radio surrogates exclaim about how small the growth in the GDP is—and it has not been good in the last year or so. They also say that the country has seen the weakest financial recovery since the Great Depression.
Of course, the 2008 crash was the greatest since 1929. Ben Bernanke, the former head of the Federal Reserve, even said the 2008 financial crisis was the worst in global history, surpassing even the Great Depression.
On September 1929 the Dow Jones Industrial Average peaked at just over 380. It did not reach that level again until November 1954, more than 25 years later. The peak before the collapse in 2008 was about 14,165, in October 2007. It was back up above that record by the first week of March 2013, less than 5 ½ years later—and the highest of all time was reached in August of this year.
Maybe things are not so bad now, financially.
What about the gap?
It has rightfully been pointed out, though, that the economic growth in this recovery period after the Great Recession has primarily benefited the wealthy. It is true that the gap between the rich and the poor is greater now than at any time since 1928.


In 1928 the top 1% in the U.S. had 23.9% of all pretax income. Last year that percentage was 22%. After this election we certainly don’t want a repeat of the great crash in the year following the 1928 election. Thus, reducing the income gap between the 1% and the 90% is one of the great challenges facing the new President.
Posted by LKSeat at 5:42 AM