“The Birth of a Nation”

The 1915 film “The Birth of a Nation” was the first movie to be shown in the White House. Based on The Clansman, Thomas Dixon’s 1905 novel, D. W. Griffith’s ground-breaking movie has been broadly criticized through the years because of its blatant racism and its glorification of the KKK.
This past weekend a movie with the exact same name was widely released. The new film is mostly about Nat Turner, the Virginia slave who in 1831 led the first major slave rebellion in the U.S. Nate Parker, the director, splendidly plays the adult Nat Turner in the movie.
Parker (b. 1979), in his directorial debut, made history at this year’s Sundance Film Festival: he sold the film’s distribution rights to Fox Searchlight Pictures for $17.5 million, the most ever paid for such rights. 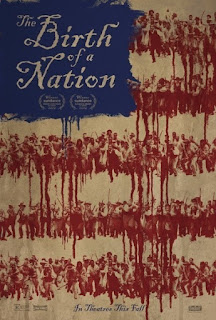 In preparation for seeing Parker’s new movie, June and I recently watched “12 Years as a Slave.” That graphic film of the terrible abusive treatment of Solomon Northup, an historic person, and other slaves began in 1841, ten years after Turner’s failed revolt. Perhaps the extremely harsh treatment of the slaves then was partly because of that revolt.
The 2014 Oscar for Best Picture was given to “12 Years as a Slave.” Parker, no doubt, has dreamed of his movie being equally successful. Even though not convicted, his chances greatly dimmed, though, with the report of his being charged with rape when he was a college student.
In Parker’s movie—and surely we need to evaluate it rather than the morality of the director and main actor—Nat Turner is first shown as a precocious boy eight or nine years old. Parker, then, portrays Turner as a winsome adult: gentle, soft-spoken, and very likeable.
While perhaps enhanced for its dramatic effects, true to extant historical information, the mistress of the plantation taught Nat to read, mostly by using the Bible, when he was a boy. Then when he was young man, he became a preacher. Interestingly, Turner’s Bible is the only artifact of his in the recently opened National Museum of African American History and Culture.
Turner, however, was told what passages of the Bible to use in his sermons as he was taken from one plantation to another by his master—for a fee. In that way he was used as a means to keep the slaves docile and subservient.
Seeing the pitiful condition of slaves on neighboring plantations where he was taken to preach, Nat became more and more dissatisfied—so he began to read the Old Testament where God commanded killing of enemies. He began to feel that was what God was calling him to do also, with the help of the fellow-slaves around him.
Thus, the 48-hour rebellion occurred. It took the lives of around 55 whites but about four times that number of blacks. Nat himself was hanged three months later, in November 1831.
"I tremble for my country when I reflect that God is just; that his justice cannot sleep forever." Those words by Thomas Jefferson appear on the opening screen of the movie.
It is certainly obvious that Nat Turner, and other slaves at that time, were treated very unjustly—and most slaves even more unjustly than Nat. Still, it is difficult to see how Nat’s rebellion in any way helped to awaken God’s justice—at least in the 1830s.


Maybe Parker’s splendid movie of Nat Turner will help bring about greater justice for the descendants of slaves of the 1830s, though. I pray that it will. Black Lives Matter.
Posted by LKSeat at 5:55 AM