It is, thankfully, just nine days until Election Day. Earlier in the year this was touted as one of the most important elections in U.S. history. Much of the tension in the presidential election, though, has been erased by HRC’s huge lead in the polls.
However, which Party controls the Senate, and even the House, rides upon the outcome of the Nov. 8 election, so it remains an extremely important election.
As the first presidential election after the Civil War, though, the election of 1868 was perhaps even more important than the one this year.
Background: Pres. Andrew Johnson
As you know, Andrew Johnson, a Democrat, was the Vice-President who was sworn into office on April 15, 1865, three hours after President Lincoln died from the assassin’s bullets.
Johnson (1808-75) was born in North Carolina but lived in Tennessee from his teenager years. He was elected to the U.S. Senate in 1857 and became the Vice-President on March 4, 1865.
Even though he was not opposed to slavery, Johnson did not support secession and thus opposed Tennessee joining the Confederate States of America in June 1861. He was the only senator from a Confederate state not to resign his senate seat.
Johnson, however, was a southerner, and after the war he wanted to protect the interests of the whites in the South and to welcome them back into the Union quickly and easily.
In 1866 Congress passed the Civil Rights Bill to protect the rights of the slaves who had been freed, but Johnson vetoed that bill.
Even though Congress overrode Johnson’s veto, he still did much to benefit the white southerners and to repress the equality of the freed slaves. As Hans L. Trefousse writes in Andrew Johnson: A Biography (1989), Johnson “preserved the South as ‘a white man’s country’” (p. 334).
1868: racist Democrats
Johnson’s main political opponents were not just the Republicans but those who were generally called Radical Republicans—men such as Rep. Thaddeus Stephens and Sen. Charles Sumner. They were the leaders in the impeachment of Pres. Johnson in February 1868.
Johnson was so unpopular that he was not chosen to be the Democratic candidate for President in the 1868 election. Horatio Seymour, a former New York governor, was nominated for the office, and Francis P. Blair, Jr., a former U.S. Representative from Missouri, became the nominee for Vice-President.
In his campaign Seymour advocated a policy of conservative, limited government. He also opposed the Reconstruction policies of the Republicans in Congress. His campaign was marked by pronounced appeals to racism with repeated attempts to brand General Ulysses S. Grant as the “Nigger” candidate and Seymour as the “White Man’s” candidate.
Likewise, V-P candidate Blair used “blatantly racist language” in his campaign speeches, setting the tone for what Eric Foner called (in 1990) “the last Presidential contest to center on white supremacy” (A Short History of Reconstruction, p. 145). 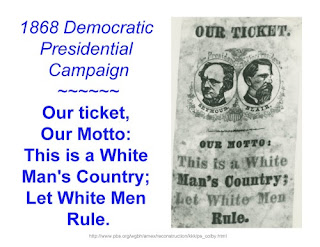 2016: racist Republicans
It is quite obvious that the position of the two Parties have completely reversed since 1868. This year Donald Trump’s main support, by far, is by white voters—and he has the overwhelming support of white supremacists. (See my June 5 article “Can Trump Make America White Again?”.)
While candidate Trump is not as blatantly racist as Seymour and Blair were in 1868, it seems clear that he and many of his supporters are racists.

Like 1868, the election this year is partly about the equality of all Americans, and I am glad the result will most likely turn out the same way, against racism, as it did then.
Posted by LKSeat at 5:43 AM