Not many books on my “To Read” list are 500 years old, but Utopia was on that list until I read it recently. “Utopia” was a term coined by the author, Thomas More, for his book with that title published (in Latin) in 1516.
Introducing More
Many of you probably remember that More was a staunch Catholic who opposed King Henry VIII breaking away from Rome and declaring himself the head of the Church in England. Accordingly, in 1535 More (b. 1478) was convicted of treason and beheaded.
A few of you also may remember that “A Man for All Seasons” was the movie which won the Academy Award for Best Picture of 1966. That is a fine film about Thomas More, a fine man.
During the seventeen semesters I taught one of the required theology classes at Rockhurst University, a Jesuit school in Kansas City, Thomas More was always a part of my lecture about the beginnings of the Church of England. I would always tell my students how I admire More because he was a man of great integrity.
It is hard to know what to make of his Utopia, though
More’s Utopia
“Utopia,” from the Greek words meaning no place (ou topos), is said to be a pun on the Greek words meaning good place (eu topos). The first definition of utopia in the online Miriam-Webster dictionary is “an imaginary and indefinitely remote place.” But when capitalized, it means “a place of ideal perfection especially in laws, government, and social conditions.”
The island of Utopia in More’s rather complex book was inhabited by people who lived quite differently than people in England—or in other parts of the world, for that matter. It was a socialistic society where people lived with little interest in gold (and all that that represents) and with a high level of equality—and satisfaction. 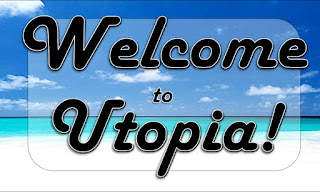 Attempts to create Utopia
Since the time of More’s intriguing novel, there have been several actual attempts to create a utopian community. One such example was New Harmony, which I mentioned in my Aug. 20 blog article. Started by one idealistic group in 1814, the whole town was sold to Robert Owen, a wealthy Welshman.
The Wikipedia article about Owen (1771–1858) says, “In 1824, Owen travelled to America to invest the bulk of his fortune in an experimental 1,000-member colony on the banks of Indiana’s Wabash River. . . . New Harmony was intended to be a Utopian society.”
But guess what? It didn’t work. In spite of all the grand plans and lofty ideals, they were unable to create a utopian society—and so has been the case of similar experiments throughout the last 500 years.
Pride, greed, sloth, and other inherent human weaknesses (sins) seem to have doomed most (all?) attempts to create Utopia.
The best examples I know of utopian societies that have existed for any length of time are those which did not seek to form Utopia but rather simply to follow the example of Christians in the Book of Acts.
For example, the Bruderhof, the Hutterites, and to some extent the Amish all seem to have been successful, at least to some degree, in creating utopian communities. Those groups all have roots in the Swiss Anabaptist movement that began in 1525, just a few years after More wrote Utopia—and a movement he would have opposed.
Does More’s Utopia, or especially the groups I just mentioned, have anything to teach us today? Most likely—if we just had the will to put the needs of all ahead of the privileges of the few.