A Praiseworthy Pioneer for Women’s Freedom

In stark contrast to my previous article about Mother Teresa, who was canonized just yesterday, this article is about a woman who throughout her lifetime opposed the Roman Catholic Church and was constantly opposed by the RCC as well as by many traditional Protestants.
Even though she died 50 years ago, this woman is still being severely criticized by some people, and Hillary Clinton’s approval of her is one of the reasons Hillary is currently being vilified, as I also wrote about recently.
Introducing Margaret Sanger
The person in question is Margaret Sanger, who was born in 1879 and died on September 6, 1966. Her lifelong passion was providing women with the knowledge about how to prevent pregnancies. In 1914 she coined the term “birth control,” and she was a fearless crusader for that cause, which culminated with the FDA’s approval of the use of “the pill” in 1960.
As a young nurse working in New York City, Margaret saw firsthand the misery of people living in poverty with more children than they could possibly care for adequately. And she saw the extreme suffering and even the death of some women who sought to have illegal and often unsafe abortions—or who tried to perform abortions on themselves.
Consistently an opponent of abortions, Sanger sought to help women gain the knowledge and the means to prevent unwanted pregnancies.
After several years of publishing and distributing literature that was deemed illegal according to the Comstock Act of 1873 and after spending in time in jail following her opening of a birth control clinic in Brooklyn in October 1916, Margaret started the American Birth Control League in 1921.
That group developed into the organization that since 1942 has been known as Planned Parenthood Federation of America, even though Margaret did not like the new name. 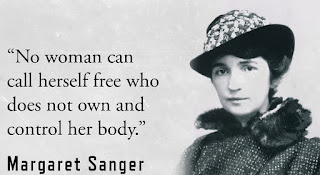 Vindicating Margaret Sanger
In addition to charges that Sanger favored abortion, which she didn’t, she has also been charged with being a supporter of eugenics, which she was, as well as being a racist, which is patently false.
There was much interest in and support of eugenics in the first part of the twentieth century—and one of the main political supporters was the Republican President Theodore Roosevelt. Sanger probably said things that we now would find problematical, but her view on eugenics in the first third of last century was very similar to that of many respected academics and politicians.
The biggest lie being told about Sanger is that she targeted African-American families. Two of her early supporters, though, were Adam Clayton Powell, pastor of the largest African-American church in the U.S. and W.E.B. Du Bois, one of the founders of the NAACP—hardly people who would be on the side of a racist.
Sanger’s vocal critics also fail to note that in 1966 Martin Luther King, Jr., was one of the first recipients of the newly-established Margaret Sanger Award and that Mrs. King publically spoke in praise of Sanger and her activities. (Hillary Clinton received that award in 1999.)
There were questionable aspects to Sanger’s personal lifestyle, things that I would not condone, but her single-minded dedication to women’s freedom and the right to control their own bodies and the size of their families was a praiseworthy contribution to the well-being of our nation.
Resources consulted
Jean H. Baker, Margaret Sanger: A Life of Passion (2011) – A sympathetic biography
Margaret Sanger, An Autobiography (1938, 1999) – In her own words
“Choices of the Heart: The Margaret Sanger Story” (1995) – TV movie
“Margaret Sanger,” Cobblestone Films (1998) – Available online at Mid-Continent Public Library