Saint Teresa: The Good and the Questionable

Anjezë Gonxhe Bojaxhiu was given that name at the time of her birth on August 26, 1910. Most people around the world, however, have for decades known her as Mother Teresa.
On September 4, this coming Sunday, during a canonization Mass in St. Peter’s Square at the Vatican, Pope Francis will declare Blessed Teresa of Calcutta to be a saint of the Roman Catholic Church.
By many people, though, Mother Teresa has been thought of as a saint for a long time. Back in 1975 the cover story of the December 29 issue of Time magazine was titled “Living Saints.” Mother Teresa’s picture was on the cover of that issue.
As a Protestant, it is not hard to understand the meaning of “saint” in the popular sense, such as that term was used in the Time article. But people being saints in the Catholic sense is a little more difficult—especially when it involves their veneration, which we Protestants sometimes incorrectly think is the worship of saints.
Recently, though, in commenting on the legacy of Saint Maximilian Kolbe, Thinking Friend Glenn Hinson wrote, “The canonization of Kolbe makes me think that the Church’s singling out of certain saints has real value in challenging the rest of us to live our faith.”
Or, as it is sometimes said, saints are special people who by their lives help us to understand God better. Accordingly, by looking at Saint Teresa’s loving service to the “poorest of the poor” in Calcutta we should be able to understand God’s love better. 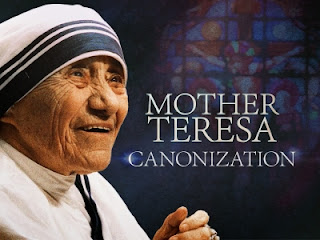 When she was 40 years old, Mother Teresa was given permission by the Pope to begin a congregation called Missionaries of Charity. From their small beginning in 1950, that group grew into a large worldwide organization.
Because of their meritorious work, starting in Calcutta (now Kolkata) and then expanding to many countries, Mother Teresa became known around the world. As one indication of how esteemed she became for what had done through the years, Mother Teresa was awarded the Nobel Peace Prize in 1979.
There are some questionable aspects of Mother Teresa’s life and work, however. For example, I have serious misgivings about some things she has said—such as her extreme words opposing abortion. In her Nobel Lecture she declared that “the greatest destroyer of peace today is abortion.”
In that speech Mother Teresa went on to assert that abortion “is a direct war, a direct killing—direct murder by the mother herself.”
Highly questionable statements!
Mother Teresa’s greatest strength was the loving service she provided for the sick and the dying who were living in poverty. Perhaps her greatest weakness was lack of action—or even talk—regarding the causes of poverty. She did a marvelous job of taking care of victims; she did little in seeking to reduce the number of victims.
To her credit, in her Nobel Lecture Mother Teresa reported that she and her co-workers were teaching “natural family planning” to “our beggars, our leprosy patients, our slum dwellers.” Elsewhere she claimed that such teaching given to three thousand families was “95 percent effective” (No Greater Love, pp. 127-8).
Still, how many more unwanted pregnancies might she have prevented if she had been willing to teach and provide the means for “artificial birth control”? She could not do that, of course, as a Catholic.
But no one, not even a saint, is perfect, and Mother Teresa did demonstrate great Christian love throughout her lifetime. So please rejoice with me this weekend as Mother Teresa is canonized, publically acknowledged as a saint.