The Vilification of Hillary

At this point--and who knows what the national political situation will be by November 8--it looks quite certain that Hillary Clinton will be the next President of the United States. In spite of her probable election, however, Hillary is the target of considerable condemnation by most conservative Republicans as well as by some liberal Democrats.
Unconscious Misogyny?
Deprecation of political opponents is nothing new in presidential elections, of course. But as a (male) psychoanalyst wrote back in May (see here), there seems to be “extreme intensity” in the vilification of Hillary.
Peter Wolson, the author of the Huffington Post article just referenced, claims that there is “deep-seated misogyny” that is “manifested in the cultural discrimination against women worldwide.” The stronger the woman, the stronger that misogynistic discrimination becomes.
That seems to be a major reason Hillary is being vilified so much, and the same would possibly be true for any other woman strong enough to be the nominee for President by one of the major political parties.
(For another article along in same vein, I recommend “The Era of ‘The Bitch’ is Coming: A Hillary Clinton presidential victory promises to usher in a new age of public misogyny”; that August 17 article in The Atlantic is well worth reading.)
Misogyny is probably real and significant; however, it doesn’t adequately explain the extent of Hillary’s vilification.
"Hillary’s America"
Earlier this month I went to a theater (which I seldom do) to see the movie titled “Hillary’s America: The Secret History of the Democratic Party.” The vilification of Hillary is strongly evident in that full-length movie by Dinesh D’Souza, whose previous film, “2016: Obama’s America,” was the vilification of Barack Obama.
Both of D’Souza’s movies were based on books he had previously published. His book Stealing America: What My Experience with Criminal Gangs Taught Me about Obama, Hillary, and the Democratic Party was published In November 2015. It is highly acclaimed by conservative Republican: there are more than 525 “customer reviews” on Amazon.com, and 85% of those reviewers gave the book five stars, the maximum.
D’Souza’s book with the same title as his new movie was published the same week the movie debuted about a month ago. Already there are more than 400 customer reviews, and 81% of them are five-stars.
I have not read the book, but since it is basically the same as the movie, I heartily agree with the 10% who gave it only one star. I also agree with the review of the movie that appeared on RogerEbert.com. (Check that out here.) Even the conservative Christian Post has a rather negative article about D’Souza’s highly questionable film (see here). 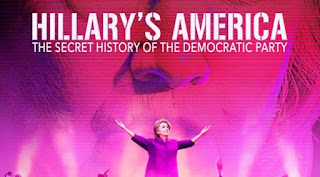 D’Souza’s attack on Hillary was partly through making her guilty by association. Much is made of her approval of Margaret Sanger’s activities and her being the recipient of the Sanger Award. (Early next month I plan to post a blog article about Sanger.)
There is also strong criticism of Hillary because of her association with Saul Alinsky. Just as the article “Hillary Haters’ Fixation on Saul Alinsky” says, “Forty-seven years after she graduated from Wellesley College, Hillary Clinton is still having to defend her senior thesis.”
If you think she should be criticized for her interest in and contact with Alinsky, please read the article linked above.
Hillary has been attacked on many matters that could be expected in a presidential campaign. But the persistent vilification of her seems unprecedented and extreme—and very unfair to the one who is most likely going to be the next POTUS.