Making Stone Soup for the Hungry

There are many weddings at this beautiful time of the year. In fact, June and I got married 59 years ago tomorrow, on May 26, 1957. Last Sunday was the wedding of our granddaughter Katrina Laffoon, who married her college sweetheart, Ryan Hlousek.
Early next month we will drive out to D.C./Maryland for the wedding of granddaughter Marian Seat, our first grandchild. Marian’s husband-to-be is Christopher Lane Mulligan, and they were high school sweethearts in the early 2000s.
Chris’s maternal grandmother was Ann McGovern, who was born on this day (May 25) in 1930. She passed away last August, and articles about her life and death appeared in newspapers across the country, including the New York Times (see here).
Ms. McGovern’s claim to fame was as the author of 50-plus children’s books. The article about her in the Aug. 28, 2015, issue of The Week says that her first book was Roy Rogers and the Mountain Lion and that its publication launched “the career of one of the country’s most popular children’s book authors.”
Her most famous book, one mentioned in the headlines of some articles about her death, was Stone Soup (1968). When it was re-published by Scholastic Inc. in 1986, the dedication page said it was “for Christopher Lane,” her one-year-old grandson. 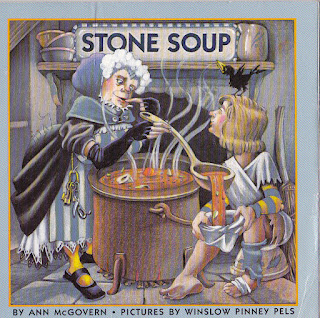 “Stone Soup” is an old folk story in which hungry strangers manipulate people into sharing their food. Or sometimes it is just one clever man conning one person into providing ingredients for the soup.

The first published version of the old folk story is said to be in 1720 by Madame de Noyer, a French journalist. The first English version was published in a British magazine in 1806—and just two years later it appeared in The American Magazine of Wit.

Of the several different versions of the old folk story I read, my favorite was “The Story of Stone Soup,” found here on the Internet. In it, a wandering soldier of “post-war Eastern Europe” gets the people of the village he arrives at to add ingredients to the pot cooking his stone. It ends by clearly stating the point of the story.
“The moral is that by working together, with everyone contributing what they can, a greater good is achieved.”
This reminded me of some interpretations of Jesus’ feeding of the 5,000, the only miracle of Jesus recorded by all four Gospels. According to some “liberal” interpretations, the miracle was not that Jesus somehow supernaturally multiplied the loaves and fishes. Rather, the miracle was changing people’s attitudes, getting them all to share the food they had brought with them.
Years ago when I first heard this interpretation of that miracle story, I was somewhat “offended,” thinking that the power of Jesus to perform miracles was being denied. And there are currently websites that similarly criticize what are considered attempts to deny Jesus’ ability to perform supernatural miracles.
Perhaps, however, the story has far more relevance if it encourages people to share now rather than merely to admire what Jesus did 2,000 years ago. But perhaps a both/and interpretation is best: maybe Jesus took all that the people shared and doubled it so that there would be enough for everyone.
And perhaps Stone Soup and the feeding of the 5,000 both can challenge us to share with the hungry. As Pope Francis said last year, “The planet has enough food for all, but it seems that there is a lack of willingness to share it with everyone.”
Can’t we all share more in making “stone soup” for the hungry?
Posted by LKSeat at 5:29 AM