It is a bit ironic to be posting this article in praise of public education from Japan, where I have come to help celebrate the centennial of Seinan Gakuin, the private school system founded by Baptist missionaries. Nevertheless, I am serious in what I write here about public education and its great nineteenth century champion, Horace Mann.
Some of my best memories from when I was a high school student are of going to nearby Maryville, Mo., for music contests. They were held at the school whose official name since 1972 has been Northwest Missouri State University.
One of the things I remember seeing on that campus as a high school student was a building bearing the name Horace Mann Laboratory School. At the time I didn’t know who Horace Mann was, but I later learned that he was one of the most important persons in the development of public education in the United States.
That school was founded 110 years ago, in June 1906. Interestingly, Mann was born 110 years before the beginning of that educational institution in Maryville that bears his name.
Born in Massachusetts on May 4, 1796, from ages ten to twenty Mann had no more than six weeks’ schooling during any year. He made use of the town library, though, and at the age of 20 he enrolled at Brown University, graduating in three years as valedictorian. He went on to become an outstanding educator and politician.
After graduating from Brown, Mann practiced law before winning a seat in the Massachusetts House of Representatives, where he served from 1827 to 1833. Then he served in the Massachusetts Senate until he became the head of the nation’s first board of education in 1837. In his biography titled Horace Mann (1974), Robert B. Downs called Mann “a highly effective missionary for universal public education.”
In addition to the school in Maryville, Mo., there are more than 70 other Horace Mann schools scattered across the nation.
There were also people named after him. For example, recently I posted an article about Julian Bond (see here). His father’s name was Horace Mann Bond—and he also became a distinguished educator, serving as the first African-American president of Lincoln University (in Penn.) from 1957 to 1972.
Often called “the father of American public education,” Mann championed six innovative educational principles:

Perhaps the most controversial of Mann’s principles was that it be non-sectarian. That idea was opposed by clerics who thought that education should include religious indoctrination—something that was being done widely at the time, and which R.J. Rushdoony (introduced recently here) and his followers think ought to be done in home schools now.
Mann became the first president of Antioch College (Ohio) in 1852. There he employed the first woman faculty member to be paid on an equal basis with her male colleagues. Mann’s commencement message to the graduating class of 1859 included the words, “be ashamed to die until you have won some victory for humanity.” 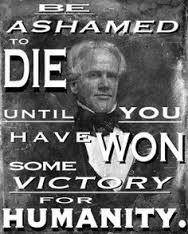 Those words are still repeated at every commencement ceremony at Antioch College—and, indeed, they are words well worth considering.
Posted by LKSeat at 5:28 AM