Tempest in a Pee Pot?

Public bathrooms have been in the news a lot lately, and the issues being discussed are not likely to dissipate soon.
One question is why they are called bathrooms in the first place. Quite clearly the issue being discussed is not places where people take baths. But for some reason people seem to think that the word “toilet” is maybe a little uncouth, so some better-sounding word is used.
Last month on our ANA flight to Japan, the “bathrooms” were called lavatories in English and “keshōshistu” (literally “makeup rooms”) in Japanese—and, of course, there were no separate facilities for men and women.
In addition to being called “loos” in Great Britain, a toilet there is often referred to as a “water closet.” It is also common in Japan, and other Asian countries, to see a public toilet identified simply as a W.C.
The issue now in the U.S., of course, is not what the public restrooms are called but who can use what facilities. The “bathroom bill” that recently became law in North Carolina has stirred a nationwide debate, and it looks as if the dispute is far from over.
Having just been in Japan for three weeks, however, the bathroom hullabaloo in the U.S. seems to be a “tempest in a teapot”—or maybe we should say “a pee pot.”
Through the years the use of public restrooms in Japan has not been universally separated according to gender, although there are generally completely separate facilities now. Before we first went to Japan 50 years ago, though, some American who had lived there “warned” us about the “co-ed” public toilets—and sure enough, from time to time there would be men and women using the same W.C.
However, I never heard of “inclusive” public toilets causing harm to anyone.
During our time in Japan earlier this month, June and I had the opportunity to meet a young trans man whom we had known many years ago as a girl. He now looks very much like a man—and seems much happier than when he was a young “male trapped in a female body.”
If our young trans friend were to go to North Carolina, however, legally he would have to use public toilets labeled “Women.” The women he would see there, however, would no doubt be greatly discomforted to meet someone like him, who looks fully like a man, in their facility. 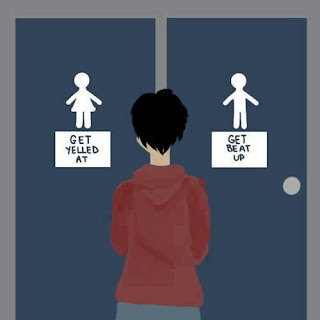 Those with little understanding of, or sympathy for, transgender persons tend to deal with the issue in a simplistic manner. For example, this week I heard talk-radio host Mark Levin pontificating about the bathroom issue, which he said shouldn’t be an issue at all.


Recently I have seen some good and important things written by Russell Moore, the head of the Southern Baptist Ethics and Religious Liberty. Last week, however, he wrote an opinion piece (see here) in which he intimated that the bathroom question is settled by not violating the Bible’s words as found in Genesis 1:27.

Both Levin’s and Moore’s arguments for traditional bathroom bifurcation are not only simplistic, they also disrespectful of and insensitive to the needs of trans men and women.

Gender identity, including how people think, look, and act, is determined by more than genitalia.
Rather than creating a tempest in a pee pot, we should acknowledge the existence of transgender people and respect their need to use public restrooms that match their identity.
Posted by LKSeat at 5:30 AM