Did President Obama Make a Sacrilege of Memorial Day?

It is a sobering experience to visit Hiroshima. I first visited there in the summer of 1967—and have never forgotten that first visit even though I have been there several times since.
President Obama visited Hiroshima last week. It was his first time and the first time for a sitting POTUS to do so.
In his remarks on May 27, the President stated, “We come to mourn the dead, including over 100,000 Japanese men, women and children; thousands of Korean; a dozen Americans held prisoner.”
“We stand here, in the middle of this city, and force ourselves to imagine the moment the bomb fell,” the President went on to say. “We listen to a silent cry. We remember all the innocents killed across the arc of that terrible war, and the wars that came before, and the wars that would follow.” 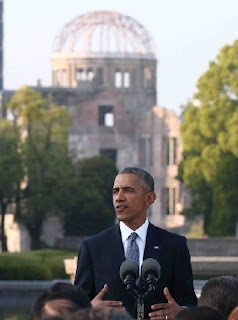 While it was said repeatedly that the President’s remarks were not an apology, at least there was acknowledgement of the fact that many, many innocent Japanese and even many non-Japanese people were killed by the bomb dropped on Hiroshima in August 1945.
Earlier, on Wednesday of last week, hours after arriving in Japan for a Group of Seven summit President Obama said that he would “honor all those who were lost in World War II.”
Some people were outraged by that statement. I heard one talk-radio host say that he was incensed that the President wanted to honor all who died in WWII, for many of those were our (American) enemies, and he was glad they were killed.
And to the chagrin of U.S. ultra-nationalists, the President shared a vision of the equal worth and dignity of everyone. He even had the audacity to expand the words “All men are created equal” in the U.S. Declaration of Independence to include all people around the world.
“The irreducible worth of every person, the insistence that every life is precious; the radical and necessary notion that we are part of a single human family–that is the story that we all must tell,” the President declared.
Today is Memorial Day in the U.S. This federal holiday originated as Decoration Day in 1868, soon after the Civil War. Gradually the name morphed into Memorial Day and the observance was extended to honor all Americans who died while in the military service.
But can we further extend our compassion on Memorial Day to include people from all countries who died in military service—and especially to the civilians who died in all countries because of military action?
Does such inclusion make a sacrilege of Memorial Day in the U.S.?
That, though, is the kind of emphasis I want on this Memorial Day. Certainly I want to be sympathetic toward those who lost loved ones while in military service. Just as the President did in Hiroshima, however, I also want to be sympathetic toward all who lost loved ones, especially those who were non-combatants, at the hands of enemy soldiers.
And, yes, I want to be sympathetic toward those whose loved ones died while in military service for other countries. Most of them were fighting because of being conscripted or because of being psychologically coerced (brainwashed) into thinking they were doing the right thing.
Those soldiers, too, were human beings, created and loved by God, and their deaths were tragic also.
At Hiroshima, the President emphasized that “we must reimagine our connection to one another as members of one human race.”


Isn’t this Memorial Day a good time for us to acknowledge that connection?
Posted by LKSeat at 5:29 AM