The Case against "Demon Rum"

Many of the great 19th-century women leaders in the U.S. were against what they considered three great evils: slavery, discrimination against women (including no voting rights), and alcohol. The first two evils have largely been eradicated. But not the third.
Jane Addams, the subject of my 9/5/15 blog article, was active in the temperance movement, as was Elizabeth Cady Stanton, the main subject of my 11/10/15 article, and her close friend Susan B. Anthony.
One of the main 19th century opponents of alcohol was Frances Willard. She is best known as the first national president of the Women’s Christian Temperance League, serving in that position from 1879 until her death in 1898.
In addition, Willard was a strong advocate of women’s suffrage, and her vision included federal aid to education, free school lunches, unions for workers, the eight-hour workday, work relief for the poor, municipal sanitation and boards of health, national transportation, strong anti-rape laws, protections against child abuse, etc.
Willard was a strong suffragette partly because she thought it would take women’s votes to pass laws against liquor. Consequently, fear that alcohol would become illegal was one of the reasons for much male opposition to giving women the right to vote.
In spite of women not being able to vote nationally, though, the Eighteenth Amendment prohibiting the production, transport, and sale of alcohol was ratified in January 1919 and went into effect a year later.
Interestingly, the Nineteenth Amendment giving women the right to vote was ratified 19 months later.
Last Dec. 22, 2015, the Washington Post published an article titled “Americans are drinking themselves to death at record rates.” According to that article, in 2014 “more than 30,700 Americans died from alcohol-induced causes,” a 35-year high.
Moreover, that number “excludes deaths from drunk driving, other accidents, and homicides committed under the influence of alcohol. If those numbers were included the annual toll of deaths directly or indirectly caused by alcohol would be closer to 90,000.”
From that and many other sources, it seems indisputable that the consumption of alcohol has a direct causal relationship to health problems, fatal and disabling accidents, homicides, domestic violence, rapes, and other negative issues, such as financial problems for those with limited means.
Of course, some will quickly say, “But that is only when alcohol is drunk excessively or irresponsibility.” While that is probably true, who ever starts drinking with the intention of doing so excessively (except maybe temporarily) or irresponsibly?
Proponents of stricter gun control repeatedly point out that guns cause some 33,000 deaths each year in this country. But if the figure of 90,000 deaths caused by alcohol is correct, guns are not nearly as much of a problem as alcohol is. Moreover, alcohol is a worldwide program. 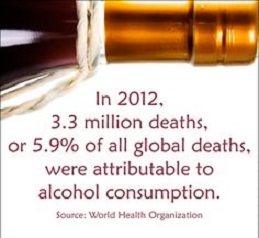 Even though I am a strong advocate of greater gun control, perhaps the NRA and its friends are correct: it is not guns that kill people, it is people who kill people. Is that really any different from saying that alcohol does not cause problems, it is the people who use alcohol excessively or irresponsibly who cause problems?

What is the solution to the alcohol problem? Probably not more laws. But maybe a long-term educational program such as there has been against tobacco. The detrimental effects of tobacco has been widely disseminated, including in public schools. As a result, smoking in this country has decreased drastically.
No doubt the nineteenth-century women who were opposed to the three big problems of slavery, discrimination against women, and “demon rum” would be pleased if society now took the latter problem much more seriously.
Posted by LKSeat at 5:43 AM