Years ago I taught a Christian Studies course at Seinan Gakuin University titled “Radical Christianity.” The Japanese word for “radical,” just like the English one, had to be defined, for it was a term easily misunderstood.
As part of my explanation I told the students how the English word, which is often transliterated into Japan, comes from the Latin word radix, which means root. So my emphasis was that radical Christianity was the sort of belief and practice that went back to its roots, to Jesus and his teaching and activities.
(By the way, do you know about Radix, the “radical” Christianity magazine? I subscribed to it for several years, beginning soon after its initial appearance in 1976.)
In explaining what radical Christianity looks like in Christian history, I talked about people such as Francis of Assisi, Kagawa Toyohiko, Martin Luther King Jr., and Clarence Jordan (among others).
The only examples I used were Christians who believed in and practiced non-violence and who were devoted to social justice. And I still believe those are characteristics of what radical Christianity should, and does, embrace. 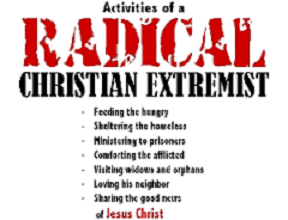 In recent years the term “radical Islam” has been widely used—and in such cases radical has a completely different meaning—or does it? In general use, radical means “associated with political views, practices, and policies of extreme change” (Merriam-Webster). Used this way, it most often includes use of violence to bring about that change.
Christianity changed from its radical beginnings to become more and more aligned with violence (war). In contrast, until the recent rise of the Taliban, ISIS, and other such radical groups, Islam became more and more peaceful through the centuries.
“Muhammad and the Caliphate” is the first chapter of the massive tome titled The Oxford History of Islam (1999). It is explained there that beginning in 627 Muhammed “launched raids against Meccan caravans, seizing valuable booty and hostages.”
Then by a “series of raids and battles” Muhammad was able to subdue some of his opponents and by “outright force” was able to subdue other groups.
Soon after Muhammed’s death in 632, Abu Bakr, his successor, sanctioned the “Apostasy wars” and then by “shows of force” brought the entire Arabian peninsula under his control by 634 (pp. 10-11).
The British historian Hugh Kennedy is the author of The Great Arab Conquests (2007). In his first chapter Kennedy explains how Muhammad’s “military campaigns” were “the beginning of the Muslim conquests. His example showed that armed force was going to be an acceptable and important element first in the defence of the new religion and then in its expansion.”
Kennedy also writes, “The Prophet’s example meant that there was no parallel to the tendency to pacificism [sic] so marked in early Christianity” (p. 48).
In spite of the changes that later took place, both in Christianity and Islam, it seems indisputable that the nature of the public activities of Jesus and Mohammed from the beginning to the end of their lives differed greatly. There was also great difference in the activities of the followers of Jesus and Mohammed in the decades after their deaths.
Restoring radical Christianity is a challenging and worthy goal for all Christians, and one I continue to promote. How badly most contemporary Christians need to go back to following the radical teachings and activities of Jesus!
On the other hand, staunchly opposing radical Islam, such as embodied by ISIS, as well as affirming and supporting the peaceful Islam that has developed through the centuries and widely practiced here in the U.S. now is also badly needed.
Posted by LKSeat at 5:29 AM