A few weeks ago I posted a blog article about political correctness. For the most part I favor the effort to be politically correct, for in its best form political correctness shows empathic understanding of those who are often discriminated against or belittled.
There was some questioning of a more recent article, though, along this very line. There was no direct reference to my not being P.C., but it was implied that what I wrote about the origins of Christianity and of Islam was problematic.
From the beginning I knew that there would likely be some pushback, for what I wrote could be used as an excuse to criticize, discriminate against, or mistreat Muslims today. I tried to counter that possibility by writing what I did in the final paragraph.
Christians around the world have just celebrated Easter (except for those in the Orthodox tradition who will not celebrate Easter until May 1). If there was, in fact, something historical about the resurrection of Jesus, Easter is an event that decisively differentiates Christianity from other religions.
Many have understood Jesus’ resurrection much too literally, seeing it is some sort of miraculous resuscitation of his physical body. That is not the kind of resurrection I am writing about.
On the other hand, many liberal Christian interpretations emphasize that Jesus’ resurrection was mainly metaphorical or “psychological” rather than historical. That is, it is explained as the “resurrection” of the spirit of Jesus in the hearts and minds of his early followers.
John Shelby Spong, for example, contends that the Jesus’ resurrection took place in Galilee, where the disciples had fled after Jesus’ crucifixion, rather than in Jerusalem, where Jesus had been buried in Joseph’s tomb.
Liberals need some way to explain the resurrection so Christianity can be considered just one religion among many that are equally valid and valuable.
That is not the kind of resurrection I am writing about either. 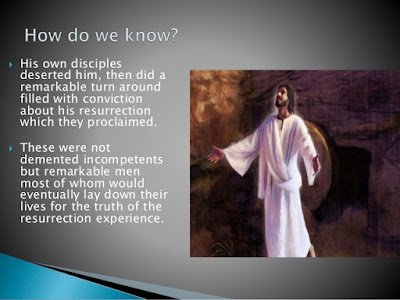 Recently, I have written a review of a book about the life and thought of Lesslie Newbigin. In that process I looked again at some of his notable writings, especially The Gospel in a Pluralist Society (1989). Newbigin (1909-98), an Englishman, was one of the premier missionaries and missiologists of the 20th century. (Several years ago I wrote a blog article in praise of Newbigin.)

Newbigin repeatedly used the words “public truth” in referring to the Christian message, and one of his smaller books is titled Truth to Tell: The Gospel as Public Truth (1991). The idea of public truth, of course, stands in stark contrast to the relativistic idea of truth in post-modernism and often in liberal Christianity as well.
He wrestles with the problem of truth not just from the standpoint of religious faith but also epistemologically, making repeated references to the significance of Michael Polanyi’s emphasis on “personal knowledge.”
In Truth to Tell, Newbigin avers, “To believe that the crucified Jesus rose from the dead, left an empty tomb, and regrouped his scatted disciples for their world mission can only be the result of a very radical change of mind indeed.”
He goes on to assert that “the simple truth is that the resurrection cannot be accommodated in any way of understanding the world except one of which it is the starting point” (p. 10-11).
Belief in the Resurrection should never lead to arrogance, condescension, or triumphalism. That belief should, however, lead faithful Christians to have confidence in the uniqueness of Jesus and to proclaim, boldly and lovingly, the significance of that pivotal event—even though some might consider it politically incorrect.
Posted by LKSeat at 5:28 AM