February each year is designated as Black History Month here in the U.S. For my contribution to this year’s emphasis on Black history, this article is mainly about two white women who were significantly involved in the struggle for the abolition of slavery in the United States.
In spite of long knowing about and being appreciative of other women abolitionists, such as Lucinda Mott and Elizabeth Cady Stanton, for some reason I had never known about Sarah and Angelina Grimké until fairly recently.
Last November I read The Invention of Wings (2014), Sue Monk Kidd’s wonderful historical novel about the Grimké sisters. I was both greatly informed and impressed.
Sarah Grimké was born in 1792 in Charleston, South Carolina, and her little sister Angelina was born in 1805. In the 1830s they became the first female antislavery pioneers and activists in the abolitionist and women’s rights movements.
Charleston, S.C., was founded in 1670 as Charles Town in honor of England’s King Charles II. By 1690 it was the fifth-largest city in North America. Charleston, as it was called after 1783, became the nation’s slave trade capital, the place where 40% of slaves brought from Africa first landed. The city was built on slave labor and thrived under a slave economy for nearly 200 years.
Soon after Lincoln was elected President, in December 1860 South Carolina was the first state to secede. The Civil War, then, began on April 12, 1861, when troops in Charleston fired on Fort Sumter, which was on an island at the entrance of Charleston Harbor.
Growing up in Charleston, the Grimké sisters certainly knew about slavery firsthand. Their father, a lawyer, politician, and judge, was also a wealthy planter who owned hundreds of slaves.
Kidd’s book begins with a chapter about Handful, the slave girl who is given as a personal slave to Sarah on her eleventh birthday—and the book is as much the story of the fictional Handful and her mother as it is about the historical Grimké sisters.
In a significant subplot of the novel, the life of Handful’s mother becomes entangled with that of a black man with the improbable name of Denmark Vesey—a historical figure I was also glad to learn about.
Vesey won a lottery in 1799 when he was 32. He used some of that money to purchase his freedom—but he also wanted to help slaves in Charleston, and elsewhere, obtain their freedom. To that end he began to draw up plans for a slave revolt.
Vesey’s plot, though, was thwarted, the revolt crushed, and he was executed in July 1822. (Remarkably, in 2014 a monument to Vesey, which you see part of in the picture, was placed in a Charleston city park.) 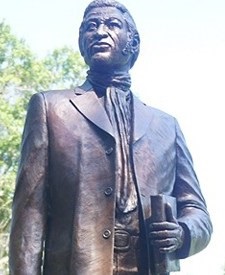 Having seen the evils of slavery even in their own home, Sarah and then Angelina a few years later moved north to escape it. The Grimké sisters became Quakers and increasingly became involved in the fight against slavery in Philadelphia and surrounding areas.

Other abolitionists could give stirring speeches about the need to abolish slavery, but the Grimké sisters from personal knowledge could testify to slavery’s evil impact on human lives. Through most of the 1830s they spoke in many public meetings, pleading for the abolition of slavery as well as for women’s rights—the first single women in the nation to do so widely.
The amazing Grimké sisters took very seriously the words a Quaker man spoke to Sarah when they first met: “To remain silent in the face of evil is itself a form of evil.”
Posted by LKSeat at 5:25 AM