What about Political Correctness?

In his first inaugural address in March 1933, President Franklin D. Roosevelt insisted that “the only thing we have to fear is fear itself.” Nevertheless, responding to the widespread fear expressed by people across the nation, on February 19, 1942, FDR took harsh measures toward people of Japanese descent who lived in the U.S.
As a result of his Executive Order 9066, approximately 120,000 men, women, and children of Japanese ancestry, almost all of whom were law-abiding citizens, were evicted from their homes on the West Coast of the U.S. and forced to live in internment camps across the country.
That was grossly unfair to the vast majority of a whole group of people who were peaceable residents in our nation.
During World War I, German-Americans were sometimes accused of being sympathetic to Germany. The U.S. Justice Department attempted to prepare a list of all German aliens, counting approximately 480,000 of them—and more than 4,000 of them were imprisoned in 1917-18.
I don’t know if my great-great-grandfather Hellmann made the Justice Department’s list or not, but he was born in Germany in 1844 and was living in St. Joseph, Mo., during WWI.
Even though his birth name was probably Johann Friedrich, in this country he went by John Frederick. The census records have my grandmother Laura Cousins’ grandfather’s name as just Fred Hellmann, so he probably didn’t suffer much anti-German discrimination.
But many German-Americans did suffer unjustly because of their name and/or their ethnicity.
The term “political correctness” has been used for many years now, often in a derogatory sense. There are, certainly, some excesses related to what is said, or not said, because of what is said to be political correctness.
On the other hand, when used positively political correctness describes the attempt not to use discriminatory or demeaning language about other people, especially about those who are “different” from the one speaking.
Thus, those who want to be fair emphasize politically correctness for the sake of women, who are often denigrated by men; for the sake of people of color, who are often discriminated against by whites; for the sake of gays/lesbians, who are often demeaned by straights; and for the sake of Jews and Muslims and others adherents of other minority religions in this country, who are often looked down on by many, including some Christians.
Tom Toles is the eminent editorial cartoonist for the Washington Post. Even though I do not have his permission to do so, perhaps since I make absolutely no money from this blog he will not object to my using this perceptive cartoon of his: 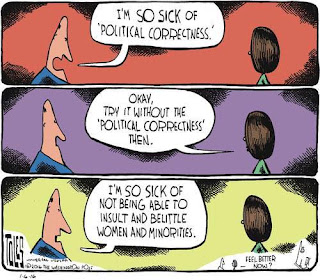 As I wrote recently, the President has often been criticized for not using the term “Islamic extremists.” His critics say that this is a grave mistake rooted in the idea of political correctness. During the Dec. 15 presidential debate Ted Cruz declared, “Political correctness is killing people.” Earlier last year, Donald Trump emoted, “I’m so tired of this politically correct crap.”

And about a year ago Ben Carson declared, “There is no such thing as a politically correct war.”
But even in times of war, or especially then, people who are not combatants and especially those who are American citizens, need to be protected from hatred and prejudice.
Posted by LKSeat at 5:30 AM