What Does “Jesus Is Lord” Mean?

Earlier this month I wrote about Dietrich Bonhoeffer and his highly influential book The Cost of Discipleship, published in a new translation in 2001 as just Discipleship. Bonhoeffer’s emphasis was upon following Jesus as Lord. But what does that mean?
For most of my life I have generally agreed with those who said that the most basic, and most important, “creedal” statement for Christianity is simply “Jesus is Lord.” All people who could sincerely make that profession, and only those who make that profession, should be considered Christians.
In my Jan. 30 blog article I mentioned that I had started reading Frederic Rich’s book Christian Nation (2013). I have now finished it, and I can’t remember when I have read a novel that has been as disturbing, and thought-provoking, as it. 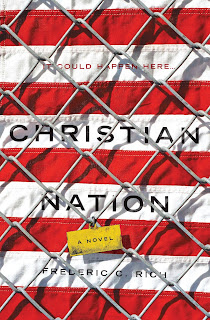 In Rich’s novel, John McCain and Sarah Palin are elected in 2008, and within a year or so McCain dies (of natural causes). Soon under President Palin there is a move to make the United States into a Christian nation as envisioned by her and those of the Christian Right who agree with her.

The movement toward the Right’s concerted attempt to establish a theocracy is greatly aided by terrorist attacks on 7/22/2012, which are much worse than the attacks of 9/11/2001. Those attacks also facilitate Palin’s reelection in 2012.
Four years later Palin’s successor is her principal advisor, the fictional Steve Jordan. He starts his inaugural speech in 2017 by declaring, “I submit America to Christ.” He then establishes a commission to draw up plans for a specific legislative program to implement his vision of a Christian nation.
Michael Farris, who is a real person (see this link to the Wikipedia article about him), was appointed chair of that commission, which included people whose names you know: John Ashcroft, Rick Perry, James Dobson, Tony Perkins, Ralph Reed, and David Barton, among others.
The third section of the completed Farris Report is titled, “This nation devoutly recognizes the authority and law of our Lord Jesus Christ.” One provision of that section states, “Only persons who have accepted the Lord Jesus Christ as their savior shall serve as federal judges.”
Maybe you can see why this caused me to think deeply about what it means to confess “Jesus is Lord.” Those seeking to establish a Christian theocracy in the U.S. use their belief in Jesus as Lord to lord it over people who are not Christians or who do not agree with their interpretation of Christianity, which I don’t.
Here is why I strongly disagree with them: proclaiming Jesus as Lord never means coercing other people. According to the biblical records, Jesus never coerced anyone to follow him. Accordingly, those who are disciples of Jesus should never seek to coerce anyone to follow him—or to follow explicit “Christian” laws enacted by those who think they are following Jesus.
In Christian Nation, though, blasphemy, all abortion, homosexual activity, adultery, extra-marital sexual activity, and even labor unions are made illegal. Moreover, all American citizens are forced to live under the government’s interpretation of Biblical law—a kind of Christian Sharia.
All of this may seem so fictitious as to be completely implausible. But I think we have to consider the fact that, in the words on the dust jacket of Christian Nation, it could happen here.
The best chance of it beginning to happen here soon is for Ted Cruz to be elected the next President. If he wins the nomination, which is still quite possible, I’ll write then about why I think that.
Posted by LKSeat at 5:29 AM