Is Becoming Inclusive Even Remotely Possible?

After posting my previous blog article, I expected to hear from one or more people saying that the idea of doing away with us/them divisions was fuzzy idealism and not at all possible.


Alas, no one made such comments, so I have to do it myself! How can we possibly become completely inclusive in October, the peak of the baseball season? Right now it is us (Go Royals!) against them (the Blue Jays, which is not even a U.S. team, for Pete’s sake).


Competitive sports is based on a strong us/them dichotomy. True, there is a type of volleyball in which rotation occurs from one side to the other. While that can still be fun to play, I’m afraid it is never going to be included in the Olympic Games.


Several days ago I saw the following image on Facebook: 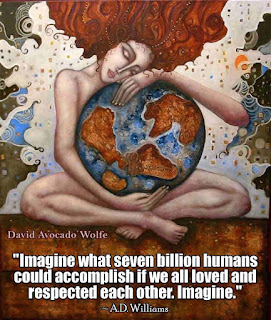 This is a nice thought—but, no, I can’t really imagine it. There is so little love and respect for so many people even in our own neighborhoods and cities I, can’t imagine most of us are going to be able in any meaningful way to love and respect the more than 7,000,000,000 people in the world.


Here in Tucson where June and I are visiting for several weeks, there are “We Stand with Rosa” signs in many yards I have driven past, including in the yard next to my daughter’s place (pictured).

Rosa Robles is a 41 year old Mexican woman who was originally detained in 2010 after a routine traffic stop revealed she was in the country illegally. In August 2014 she moved into a Presbyterian church here in Tucson for sanctuary after receiving an order of deportation.


Rosa said she came to the U.S. in 1999 to give her kids a better life. They were born in Mexico, but qualify for relief by the President’s executive action. She admits that she did break the law by entering the country illegally—but thinks those with families and clean records should be spared deportation.


Those who are standing with Rosa in Tucson are loving and respecting her and her family. But Rosa is just one out of millions of “illegals” in this country—and many voices cry out for “them” to be deported—and the Immigration and Customs Enforcement agency is trying to do its job by deporting Rosa.


There is widespread clamor for securing the borders—not just against terrorists and criminals, but against all who seek to come into this country without going through the lengthy, and expensive, legal immigration process.


In a world where there is only “us” and no “thems,” there would be no borders, national or otherwise. But, sadly, that is not possible in today’s world. Most of the people in this country would fight rather than have completely open borders.


But what if we all loved and respected each another, if we loved others as we love ourselves, if we practiced the Golden Rule?


In his Civilization and Its Discontents (1930) Freud wrote that the commandment “Love thy neighbour as thyself is impossible to fulfill.” He is probably correct.


Writing five years later in Interpretation of Christian Ethics, Reinhold Niebuhr cites Freud’s words in “The Relevance of an Impossible Ethical Ideal,” the fourth chapter. Then he goes on to insist that “the law of love is an impossible possibility.”


Yes, becoming completely inclusive is, no doubt, not even remotely possible. But becoming more and more inclusive is a real possibility—and a constant challenge for all who seek to follow the teachings of Jesus Christ.
Posted by LKSeat at 7:04 AM