Edwin Markham was from Oregon and for eight years was the Poet Laureate of that state. Although he published several books of poems, Markham (1852-1940) is now best known for “Outwitted,” a poem with only four lines:

I don’t know when I first heard, and liked, that epigram by Markham, but I’m sure it was more than 50 years ago. It is a good one, and I have seen it posted on Facebook and elsewhere two or three times just this month.
We all grow up with a sense of exclusion: there is us (people in my family, my neighborhood, my school, my church, my nation, etc.) and them (people whom we consider different from us, competitors, and others we often consider threatening).
It is important, though, for us to go beyond the usual us/them divisions—such as white/black, rich/poor, man/woman, old/young, straights/LGBTs, Americans/foreigners (or Nihonjin/gaijin), citizens/illegals, and so on.
Recently I happened to see these striking words: “There are no others, there is only us.” (There’s a remarkable video by that name at https://vimeo.com/7792828.) This is the kind of inclusion I am writing about.
(I am not dealing here with the theological/missiological position called inclusivism; I wrote a little about that idea and its rivals in a blog article back in 2010—and may want to address that subject again sometime.)
The inclusive attitude I am writing about is one of loving acceptance of people, of having arms open to welcome and to embrace anyone or everyone, of drawing a circle (as Markham would say) that takes “others” in.
One of my favorite Bible verses is Matthew 11:18, where Jesus says, “Come to me, all you who are struggling hard and carrying heavy loads, and I will give you rest” (CEB).
And one of my favorite mental images of Jesus as the Christ is him standing with outstretched arms, welcoming everyone. That idea is portrayed in the following painting (which I still like in spite of the stylized white robe): 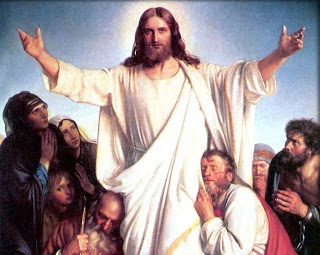 Several years ago, one of the members of Fukuoka International Church, of which I was co-pastor, had many struggles with his faith. He feared that being a follower of Jesus Christ was limiting, necessitating a view of the world he thought was too narrow.
More than once I tried to assure my young friend that a proper understanding of Christ is actually a broadening experience. Following Christ means accepting all people and affirming all truth.
In my book The Limits of Liberalism I wrote briefly about the “Cosmic Christ.” While there are some problems in the way that idea has been used, the assertion that Christ, the Savior, was uniquely present in Jesus of Nazareth but not limited to a first century Galilean man is quite significant.
Without question, Christianity has often held to an exclusivism that has been divisive and restrictive. But a deeper understanding moves one from exclusion to inclusion and from restriction to expansion.
Maturing in faith impels a person to move from the us/them mentality of childhood to including “others” as a part of an inclusive circle of “we.”
Posted by LKSeat at 7:03 AM