Not many baby boys are named Thoroughgood, but that is the name William and Norma Marshall gave their son after his birth in 1908. As a second-grader, though, Thoroughgood decided he wanted a shorter, quicker-to-spell name, so he changed it to Thurgood.


The boy’s grandfather was a slave who had only one name, Marshall. When he was freed during the Civil War, he chose Thoroughgood as his first name—so now we know where Thurgood got his too-long name.


Thurgood Marshall, went on to become one of the most respected names in the United States. And his name lives on as the airport on the Maryland side of Washington, D.C., is officially the Baltimore/Washington International Thurgood Marshall Airport.

Marshall has also been in the public media this past month. Wil Haygood’s 400-page book Showdown: Thurgood Marshall and the Supreme Court Nomination That Changed America was published the middle of last month—and many substantial reviews have appeared in newspapers and magazines.


(Haygood is also the author of the book that became the basis of “The Butler,” a popular 2013 movie.)


Marshall came to be known as Mr. Civil Rights. As the NAACP’s top attorney from 1938 to 1961, much of his career was dedicated to the long, difficult struggle for the civil rights of African-Americans.


During those years he argued 32 cases before the Supreme Court, winning 29 of them—the most famous being in 1954. Marshall’s biggest challenge was seeking to overturn “Plessy v. Ferguson,” the 1896 decision ruling that state laws may enforce separation of races as long as all citizens receive equal treatment. 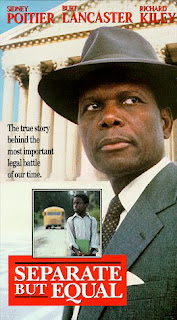 
Later that case was merged with “Brown v. Board of Education” and two other cases which Marshall successfully argued before the Supreme Court in 1954. That landmark decision outlawed legal segregation in this country.

The new interpretation of the law triggered strong negative response, of course, especially by the Ku Klux Klan. Referring to the Klan in a February 1956 speech, Marshall declared, “We’ve got the law, religion and God on our side, and the devil is on the other side” (cited in Carl Rowen, Dream Makers, Dream Breakers, p. 281).


In August 1965 Marshall was appointed as the first African-American to be United States Solicitor General, the fourth-highest ranking official in the U.S. Department of Justice. Then after being nominated to the Supreme Court by President Johnson—and after a difficult period obtaining congressional confirmation—48 years ago this month, in October 1967, Marshall became the first African-American Supreme Court Justice.


He served admirably in that position for almost 24 years. Current Supreme Court Justice Elena Kagan, who at the beginning of her career clerked for Marshall, has called him “the greatest lawyer of the 20th century.”


Marshall retired from the Supreme Court on October 1, 1991, and died less than 16 months later at the age of 84.
There was considerable pressure for the first President Bush to appoint another American-American as Marshall’s successor—and he did. After acrimonious confirmation hearings, Clarence Thomas was confirmed by a 52–48 vote on October 15, 1991.


It soon became clear, though, that Justice Thomas, one of the most conservative members of the SCOTUS, is no Marshall. For many, he has been and continues to be a great disappointment.


But Thurgood Marshall, while maybe not thoroughly good, was a great man, lawyer, and Supreme Court Justice.
Posted by LKSeat at 6:39 AM