As you probably know, in 2020 the Treasury Department is planning to issue a new $10 bill with the picture of a woman on it. Jane Addams was one name on a list I saw suggesting twenty women worth being considered for that honor.


Wanting to learn more about her life and work, last month I read Robin K. Berson’s book Jane Addams: A Biography (2004)
Berson tells the fascinating story of Jane, who was born 155 years ago tomorrow (on September 6, 1860) in Illinois near the Wisconsin border about 250 miles (as the crow flies) almost due north of St. Louis. Hers was an upper middle class family, and her father served as a state senator for seven terms. (He was also a personal friend of Abraham Lincoln.)
As a girl and young woman, Jane had various health issues. Further, by the time she was 21, she “felt an overwhelming sense of failure, a despairing purposelessness, a debilitating passivity” (Berson, p. 14).
After several unfruitful years, in 1888 during a visit to England she visited Toynbee Hall, a “settlement” in a poor district in London. That visit sparked her desire to open a similar facility in Chicago—and she did. Hull-House opened its doors in September 1889.
A settlement house is defined as “a center in an underprivileged area that provides community services.” And that is what Hull-House was for more than 120 years. Unfortunately, it closed in 2012.
According to the Chicago Tribune article announcing its closing, “The organization, first formed in 1889, has provided foster care, domestic violence counseling, child development programs and job training to 60,000 children, families and community groups each year.” 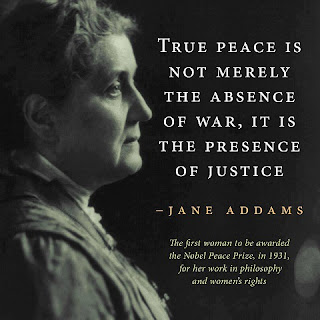 Jane Addams died in 1935, but during her 75 years she was involved in far more than helping the poor people of Chicago—although those efforts were certainly praiseworthy. Beginning especially in 1915, and for the rest of her life, she was an untiring opponent of war and advocate for world peace.
Addams presided at the International Congress of Women, which met in The Hague, and was the president of the Women’s International League for Peace and Freedom (WILPF), which grew out of that 1915 meeting.
She presided at six congresses of WILPF, and partly for her work with that organization she was awarded the Nobel Peace Prize in 1931—the first American woman to win a Nobel Prize.
Addams was an untiring supporter of those who were exploited and/or discriminated against. Accordingly, she was a co-founder of the National Association for the Advancement of Colored People (NAACP) in 1909 and the American Civil Liberties Union (ACLU) in 1920.
She was also prominently involved in the labor movement and a strong advocate of unions. Because of that kind of activity and advocacy, as well as because of her unwavering pacifism, she came under considerable criticism during the 1920s.
In fact, J. Edgar Hoover went so far as to characterize Addams as “the most dangerous woman in America.”
The Road to Character by the New York Times op-ed writer David Brooks has been one of the bestselling non-fiction books of 2015. In the second chapter Brooks writes appreciatively of the life and work of Jane Addams, highlighting how she “dedicated her life to serving the needy.”
In spite of the criticism by Hoover and others, at the time of her death she was, once again, very high regarded. Although she likely will not be the one selected, Jane Addams is indeed a woman worth being considered for the new $10 bill.
Posted by LKSeat at 5:27 AM