Is Sister Joan (and All Others Who Believe in God) Delusional?

Why are people who show the most evidence of firmly believing in and being committed to God not taken more seriously by atheists?

There are many noted people who made significant life changes because of what they resolutely believed was direct experience of God.

But people such as these are dismissed as superstitious, irrational, or even delusional by those who are ardent atheists—such as Jerry A. Coyne.

Coyne (b. 1949) is a professor of biology at the University of Chicago. His book Why Evolution Is True was on the “Best Sellers” list of the New York Times in 2009. In May of this year his new book, Faith vs. Fact: Why Science and Religion are Incompatible, was published.

Back in 2006, Richard Dawkins’s book The God Delusion was a bestselling book. In it the British biologist argued that belief in a personal God qualifies as a delusion, which he defines as a persistent false belief held in the face of strong contradictory evidence.


The distinguished geneticist Jerry Coyne trains his formidable intellectual firepower on religious faith, and it’s hard to see how any reasonable person can resist the conclusions of his superbly argued book. Though religion will live on in the minds of the unlettered, in educated circles faith is entering its death throes.

But has Coyne been adequately “scientific” in his research? He considers many religious fundamentalists and examples from splinter religious groups, such as Jehovah's Witnesses and Scientology. But he doesn’t consider people of deep faith based on direct experience of God, such as the people in the list above—or such as Joan Chittister.

This month I have been reading some of Chittister’s writings, especially her superlative Called to Question: A Spiritual Memoir (2004). Sister Joan (yes, she is a Catholic nun, born in 1936), has struggled through life questioning dogmatism and institutional religion (Catholicism).

But without question, she is a woman of unflagging faith in God. A biography of Sr. Joan, by Tom Roberts, will be published tomorrow, October 1. Its title: Joan Chittister: Her Journey From Certainty to Faith. 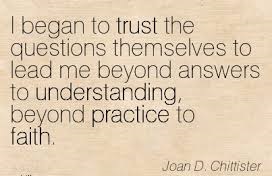 And Sister Joan certainly has been, and is, a part of “educated circles.” She has a Ph.D. (from Penn State University), is the author of over 50 books, and has been a research associate at Cambridge University.

Coyne doesn’t consider people like her to be worthy dialogue partners, though. He declares that “anything useful will come from a monologue—one in which science does all the talking and religion the listening” (p. 260).

And while he doesn’t say so explicitly, Coyne, like Dawkins, seems to think that Sr. Joan, and all others of us who believe in God, are delusional because of our faith in God, which cannot be adequately authenticated by scientific evidence.

But why does Coyne, or any other militant atheist, have the right to make a judgment about the psychological condition of Sister Joan—or of anyone who claims to have personal and meaningful experience of God?

Why should she have the richness of her experience denigrated by the paucity of his experience?
Posted by LKSeat at 6:37 AM