Religion and Irreligion: Friends or Foes?

Atheists, agnostics, and other people who profess no religious faith have often been criticized, ostracized, ridiculed, discriminated against, and belittled.
Especially in recent years such people have begun to fight back. Some of that fight has been rather hostile towards religion.
The writings/talks of the “new atheists”—Richard Dawkins, Daniel Dennett, Sam Harris, and Christopher Hitchens—are strong attacks on religion and belief in God. (I have read at least one book by each of these.)
But a milder form of irreligion is developing. One key spokesman for this movement is Phil Zuckerman, a professor of sociology and secular studies at Pitzer College, a not widely-known but highly-rated school in California.
This month I sped-read Zuckerman’s Faith No More: Why People Reject Religion (2012) and read more carefully his Living the Secular Life: New Answers to Old Questions (2014). 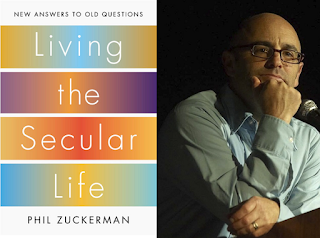 The latter will be discussed at the September meeting of Vital Conversations here in the Northland (of Kansas City) with Helen Springer as a guest resource person.
Helen is the Executive Director of Oasis, a secular “church” in Kansas City. Their website, which you can access with this link, says, “Here, you’ll find a retreat—an oasis of sorts—for Agnostics, Humanists, Skeptics, Atheists, Freethinkers, Deists, questioning Theists and the like.”
Those are the kind of people Zuckerman writes for or on behalf of.
Although he seems a bit caustic at times (but those of the majority always have to be careful in criticizing the statements of those in a discriminated-against minority), Zuckerman writes mostly in an irenic manner that suggests irreligion and religion can be friends rather than foes.
The secularists he writes about are mostly, like he himself, highly moral people who would rank rather high on Maslow’s scale of self-actualization. On the other hand, the religious people he refers to are mostly narrow-minded conservatives/fundamentalists or hypocrites.
There is little, if any, recognition of the irreligious people who are self-centered, ill-willed, insensitive individuals and detrimental to society.
It is not hard to see that there are good, moral secularists such as those he mentions and such as he himself doubtlessly is. But it is also not hard to see that there are some (many?) secularists who are not so good or moral.
It is also not hard to see that there are some (many?) religious people who are like the unattractive individuals or groups he mentions. But there are also many religious people who do considerable good in society.
To his credit, though, early in the book Zuckerman writes,

What he says about Greg Epstein, the humanist chaplain at Harvard and author of Good Without God (2005), is something I can appreciate.
In reading the pages following Epstein’s introduction, though, I thought that humanism is probably right in much that it affirms and wrong in much that it denies.
Surely a clearer both/and viewpoint is not only possible but also definitely desirable.
Religious humanists can, and do, work on all the problems of people in this world that secular humanists do. Thus, healthy religion and healthy irreligion can, and should, cooperate as friends; they don’t have to be foes.
Moreover, the limited worldview of secularists should not be touted as superior to the broader worldview of those with mature religious faith.
Posted by LKSeat at 5:28 AM