The Significance of August 15

It goes without saying that for me, personally, today (August 15) is a very significant date, for this is my birthday. Little did I know, though, growing up as a boy in rural northwest Missouri that August 15 is one of the most significant dates in Japanese history and also an important date for the Roman Catholic Church.
In Japan, August 15 is usually referred to as shusenbi (“end of the war day”), although since 1982 it has been officially designated by the Japanese government as “the day for mourning of war dead and praying for peace.”
In the U.S. September 2, when the signing of the surrender document aboard the USS Missouri occurred, is considered V-J Day. But it was on August 15, 1945, that Emperor Hirohito announced on radio to the startled and grieving Japanese public that Japan had accepted the terms of surrender included in the Potsdam Declaration of July 26.
In classic understatement, the Emperor told the Japanese citizens, who were hearing his voice for the first time, “the war situation has developed not necessarily to Japan's advantage.” (Even then, the Emperor’s speech was not a direct broadcast; it was replayed from a phonograph recording made in the Tokyo Imperial Palace a day or two before.) 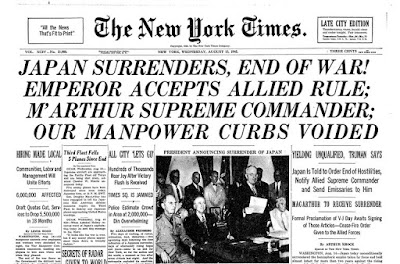 For centuries before that fateful day in 1945, and long before it was made a Church dogma by Pope Pius XII in 1950, the Assumption of the Virgin Mary into Heaven had been celebrated on August 15. That is the event by which Mary “having completed the course of her earthly life, was assumed body and soul into heavenly glory” according to the Catholic Church, and it is still a “holy day of obligation.”
Doubtlessly, it was by intention that Ignatius Loyola and his six friends in 1534 formed the Society of Jesus on August 15. Then, exactly fifteen years later, Francis Xavier, one of the seven original Jesuits and the first Christian missionary to Japan, first set foot in that country.
In the book about Takashi Nagai that I mentioned earlier this month, author Paul Glynn tells about the 400th anniversary of that event being celebrated by Dr. Nagai and other Christians in Nagasaki on August 15, 1949.
And in his book Bells of Nagasaki, Dr. Nagai tells of going to the dawn mass on August 15, just six days after the bombing, in celebration of the Feast of the Assumption (p. 77).
On November 23, 1945, there was a memorial mass for the more than 8,000 Christians who were victims of the Nagasaki atomic bomb. Dr. Nagai gave an address to those who had gathered by the ruins of the Urakami Cathedral.
In that notable speech, Dr. Nagai said, “On August 15th, the imperial edict that put an end to the fighting was officially issued, and the whole world saw the light of peace. August 15th is also the great feast of the Assumption of Mary. It is not for nothing that the Urakami Cathedral was consecrated to Her” (p. 107).
(That Cathedral, which in 1945 was the largest church building in Asia, was called St. Mary’s Cathedral in English.)
Last Sunday most Christians and many others all across Japan thought deeply about the tragic events that took place in Japan 70 years ago this month and about the end of the war on August 15.
Let us join with them, and people all around the world, to remember that today is an appropriate day for mourning the war dead—in all countries—and praying for world peace.
Posted by LKSeat at 5:28 AM