Iran is much in the news these days, mainly because of the conflicting views about the “Iran deal,” which is highly touted by the Obama administration and highly trashed by most Republicans—and some Democrats such as Senator Schumer.
And most people remember well, and with great negativity, the events of the Iranian Revolution in 1979—and the Iran hostage crisis when 52 Americans were seized and held for 444 days.
The latter was particularly a bitter pill for President Carter: it was perhaps the decisive reason he was not re-elected for a second term. Most of you will perhaps recall that the hostages were released as President Reagan was being inaugurated in January 1981.
But not so many people now remember what transpired in Iran back in 1953.
On August 15 that year, exactly eight years after the surrender of Japan, the U.S. began to determine the fate of another country. That was the start of Operation Ajax, the coup d’état orchestrated by the CIA against the democratically elected prime minister of Iran.
That prime minister was Muhammad Mossadegh, and his story is told in Christopher de Bellaigue’s notable book Patriot of Persia: Muhammad Mossadegh and a Tragic Anglo-American Coup (2012). 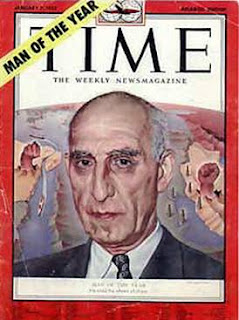 Perhaps few now remember Mossadegh. He was, however, widely known 65 years ago—so much so that he was Time magazine’s Man of the Year for 1951, chosen over such outstanding personages as General Eisenhower and General McArthur.
The 1953 crisis in Iran developed, not surprisingly, because of oil. The Anglo-Iranian Oil Company was an English firm—the first company to extract petroleum from Iran, beginning in 1908 when Iran was still called Persia. (The year after the coup, the company’s name was changed to what we know it as today: British Petroleum or BP.)
The strong dissatisfaction with Mossadegh as the political head of Iran was primarily because of his drastic act of nationalizing the oil company that was so lucrative for Britain, but which seemed exceedingly unfair to most Iranians.
President Truman refused to approve the U.S. action to overthrow Mossadegh, but soon after President Eisenhower took office, the plan was approved and executed that summer. The pretext was the necessity of combatting a possible Communist takeover of Iran.
Two powerful brothers were behind the planning and implementation of the coup: John Foster Dulles, who was Eisenhower’s Secretary of State, and Allen Dulles, the Director of the CIA. (The new airport on the Virginia side of Washington, D.C., which opened in 1962, was named for the former.)
Kermit Roosevelt, the grandson of President Theodore Roosevelt, was the head of the CIA’s Middle East Department and charged with carrying out the coup. His undercover activities and details of the coup are well told in journalist Stephen Kinzer’s All the Shah’s Men: An American Coup and the Roots of Middle East Terror (2003).
Mohammad Reza Pahlavi was the Shah (king) of Iran beginning in 1941, but his direct rule came mostly after the 1953 coup. According to Kinzer, in the 1960s and 1970s he “became increasingly isolated and dictatorial. He crushed dissent by whatever means necessary” (p. 196).
Strong dislike of the Shah’s cruel rule fueled the 1979 Iranian Revolution.
Much of Iran’s current hatred of the U.S. can be traced back to the CIA sponsored coup in 1953 and to the Shah being put in power then. As Kinzer concludes, “Operation Ajax has left a haunting and terrible legacy” (p. 215).
The “Iran deal” will, we hope and pray, be the beginning of an improved relationship between the U.S. and Iran.
Posted by LKSeat at 5:30 AM