This week is the 70th anniversary of the atomic bombing of the cities of Hiroshima and Nagasaki. Many of you will see/hear mention made of this noteworthy anniversary in the public media, but please consider with me some of the facts and interpretations of those tragic events.


The first ever atomic bomb dropped in warfare was at 8:15 (local time) on the morning of August 6, 1945. Although not nearly as many people were killed that day as in the firebombing of Tokyo on March 9-10, the use of the atomic bomb ushered in a terrible new age of warfare. 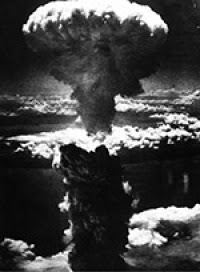 The firebombing of Tokyo was carried out by 279 airplanes, but in Hiroshima one bomb dropped from one airplane instantly killed from 70,000 to 80,000 people. And unlike the bombs up until this time, the atomic bombs caused “radiation sickness” that resulted in the death of more people than were killed instantly.

Just three days later, on August 9, shortly after 11:00 a.m. the second atomic bomb was dropped on the city of Nagasaki. About 40,000 people died there that day. The combined death toll from the two bombs, however, was considerably over 200,000 by the end of 1945.


After all these years, the debate about the use of those two atomic bombs continues. Last month I heard a talk by American historian Richard Frank at the Truman Library in Independence. Frank, author of Downfall: The End of the Imperial Japanese Empire (1999), was emphatic in his insistence that both atomic bombs were completely necessary for ending the Pacific War.


By contrast, Australian historian Paul Ham concludes his book Hiroshima, Nagasaki: The Real Story of the Atomic Bombings and Their Aftermath (2011) with these words:

At the time of war, people will applaud any story their government feeds them. Americans continue to swear blind [sic] that the bombs alone ended the war; that they were America’s ‘least abhorrent’ choice. These are plainly false propositions, salves to uneasy consciences over what was actually done on 6 and 9 August 1945 when, under a summer sky without warning, hundreds of thousands of civilian men, women and children felt the sun fall on their heads (p. 510).

One of the most intriguing personal accounts of a survivor of the bombings is that left by Takashi Nagai, a medical doctor and professor at the Nagasaki Medical College near the epicenter of the atomic explosion. His first-hand account is found in The Bells of Nagasaki (Japanese, 1949; English, 1984).


Paul Glynn’s Song for Nagasaki (1989) is an excellent biography about Dr. Nagai. Reading the experiences of this devout Christian doctor gives a much different perspective of the atomic bomb from what is usually heard in this country.
Fortunately, no nuclear device has been used in military action since 1945, and for that we can be most grateful. But vigilance is required by the peoples of the world. Perhaps the most frightening realization is that both India and Pakistan have nuclear weapons—and most probably Israel as well.


And a large number of nukes still remain in Russia--and in the arsenal of Pres. Putin. The Federation of American Scientists reports that Russia now has a stockpile of approximately 4,500 nuclear warheads, including nearly 1,800 strategic warheads deployed on missiles and at bomber bases. And the U.S., the only country to drop atomic bombs in warfare, has about 4,760 with 2,080 deployed.


So, as we think back to the horrors of 1945, let’s continue to cry out with people of conscience around the world, No More Hiroshimas, No More Nagasakis!
Posted by LKSeat at 5:28 AM