"We’re the first generation to feel the impact of climate change and the last generation that can do something about it.”
President Obama spoke those words on August 3 as he announced the final rules under the federal Clean Power Plan. (You can listen to his full speech here and read an overview of the Plan here.)
In the overview, the EPA states, “The Clean Power Plan will reduce carbon pollution from power plants, the nation’s largest source, while maintaining energy reliability and affordability.”
The EPA document goes on to say, “Fossil fuels will continue to be a critical component of America’s energy future. The Clean Power Plan simply makes sure that fossil fuel-fired power plants will operate more cleanly and efficiently, while expanding the capacity for zero- and low-emitting power sources.”
The day following the President’s announcement, a coalition of Christian leaders issued a statement (see this article) calling on the presidential candidates to address climate change in the first presidential debate on August 6.
They didn’t do that, though. There was not one mention of global warming or the President’s Clean Power Plan. Most of them will likely oppose the President’s plan, however.
The day before Pres. Obama’s broadcast, Senator Ted Cruz was one of five presidential contenders who attended the Freedom Partners forum held in a southern California resort hotel. (Freedom Partners is composed of around 200 members, each paying a minimum $100,000 in annual dues; it is partially funded by the Koch brothers.)
At that 8/2 meeting, Sen. Cruz expressed “full out denial” of global warming, saying that “the data and facts don’t support” the claim that humans are causing climate change. He also criticized the Clean Power Plan on that day before its final details were made public.
James L. Powell (b. 1936), who holds a doctorate in geochemistry from MIT and has served as president of two colleges as well as the Franklin Institute Science Museum in Philadelphia, has assembled every peer-reviewed study published in 2013 that addressed the issue of climate change. The total was 10,885 essays/articles.
Of those 10,885, just two peer-reviewed studies challenged anthropogenic climate change. (See more about that here.) So what does Sen. Cruz know that the writers of 10,883 articles acknowledging human-caused global warming don’t?
It is embarrassing for many of us Christians that Sen. Cruz is so outspoken about his Christian faith.
In responding to the question on August 6 about whether he had received any word from God, Cruz said, “I am blessed to receive a word from God every day in receiving the scriptures and reading the scriptures. And God speaks through the Bible.”
Unfortunately, Cruz seems not only to ignore what most scientists say about global warming but also what the Bible says about caring for creation.
In contrast, Interfaith Power & Light (IPL) is a religious organization whose mission “is to be faithful stewards of Creation by responding to global warming through the promotion of energy conservation, energy efficiency, and renewable energy.” (See IPL’s full statement here.) 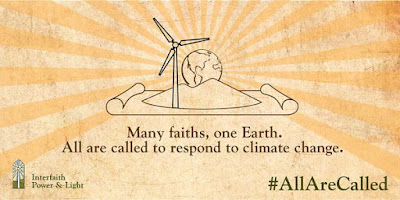 The IPL has organizations in 40 states, and an August 3 press release by the Kansas IPL applauded the President’s announcement of the final Clean Power Plan rules.
Earlier this summer Pope Francis issued a significant encyclical on climate change. That 184-page document emphasizes that the problem is urgent and calls for “a new dialogue about how we are shaping the future of our planet.”
I truly hope a steadily increasing number of people will join the Pope and the IPL, and the President, in combatting global warming—before it is too late.
Posted by LKSeat at 5:30 AM