Do you have a list of the best novels you have ever read?
In the late 1970s or early ’80s I first made a list of “Best Ten” novels—those that I had read and found most impressive. With little hesitation, I put John Steinbeck’s “East of Eden” (1952) on that list. And it’s still there.
Back when I was a seminary student—and that is more than 50 years ago now—one of my favorite professors was Dr. Dale Moody. He was my systematic theology teacher, but in class one day he talked about the value of reading good novels.
He mentioned “East of Eden” as an example of the kind of novel he was talking about.
Because of being extremely busy as a seminary student and pastor, then as a graduate student, and then later as a Japanese language school student, it was not until the summer of 1969 that I started reading novels.
The first one I chose was “East of Eden.”
Since I enjoyed that book so much, I have averaged reading a novel a month ever since. (That is what I do to relax at bedtime.)
This month I read “East of Eden” again as it was the selection for the Great Books KC April meeting. June also read it, and then before attending the April 25 discussion we watched (also for the second time) the 1955 movie based on the book .
James Dean was the main character in the movie, which was based on only about the last fourth of the book. And while it is not a bad movie, it certainly does not have the profundity of the Steinbeck novel.
The theme of the book centers on the meaning of the Hebrew word timshel used in Genesis 4:7. (And there are allusions throughout the book to the story of Cain and Abel as found in the fourth chapter of Genesis.)
Most newer translations of the Bible translate timshel as “you must.” That is maybe about the same meaning as the translation in the KJV as well as the 1899 Douay version: “thou shalt.”
Those words are a command, which we humans may or may not be able to carry out.
However, in the novel Lee, the amazing Chinese servant and one of the most interesting characters in the book who doesn’t even appear in the movie, concludes with the help of Chinese scholars and a rabbi that timshel should be translated “thou mayest.” 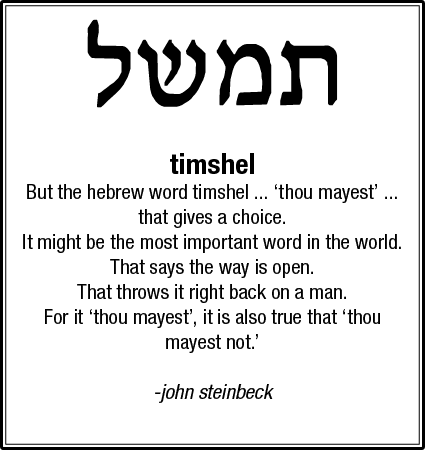 Both the Complete Jewish Bible (1998) and the New American Bible (2011) translate timshel as “you can,” words with the same meaning as “thou mayest.”
Moral freedom, then, becomes the key theme in “East of Eden.” Humans have the freedom to choose a life of hope and redemption, to forget the past and even what their parents did to them. Everyone has the freedom to break free from past constraints and to forge a better future.
While working on this article, I received an email showing some of the world’s most creative statues and sculptures. (See those amazing works here.)
One was “Freedom” (pictured below) by Zenos Frudakis and located in Center City, Philadelphia. It illustrates well the idea of timshel as interpreted in “East of Eden.” 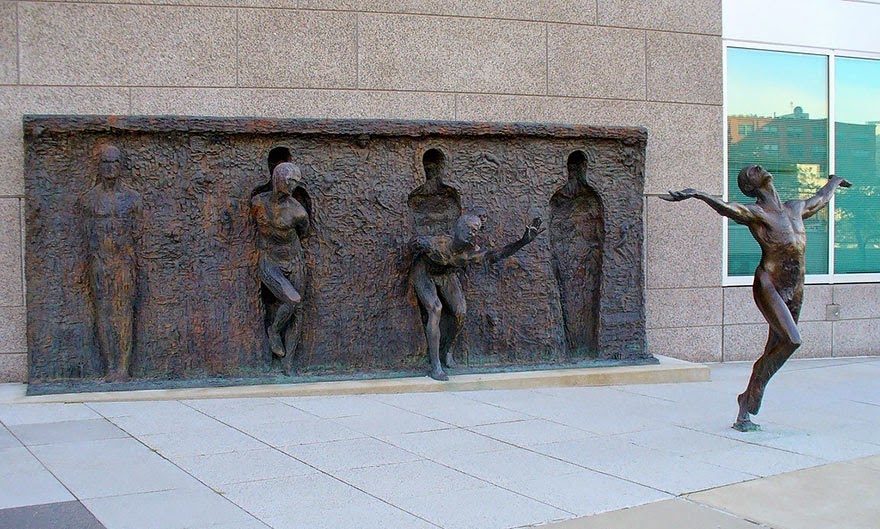 If timshel, God’s word to Cain, means “thou mayest” (you can), which it well might, it is a wonderful word of freedom and promise.
A lingering, and troublesome, question, though, is this: if we have moral freedom, if we can choose good instead of evil, why do we humans so often choose that which is not good for ourselves and for others?
Posted by LKSeat at 5:28 AM