Bourgeois for the Proletariat

In Marxist theory, society is divided into the bourgeois and the proletariat. The former are members of the property-owning class, also known as capitalists. The latter term refers to the class of workers, who do not possess capital or property and must sell their manual labor to survive.
It’s a bit ironic that a man whose family name is Bourgeois has lived his life as a passionate advocate for the proletariat and others who are part of the “underside of history” (Gutiérrez).
I don’t remember hearing about Bourgeois before 2011, when I read Deena Guzder’s book, "Divine Rebels: American Christian Activists for Social Justice" (2011). Guzder (b. 1984), a non-Christian human rights journalist, writes very positively about Bourgeois and other Christian activists.
Ever since reading Guzder’s engaging chapter about Bourgeois, I have wanted to learn more about him, so recently I read James Hodge and Linda Cooper’s “Disturbing the Peace” (2004), a detailed and well-written book about Bourgeois. 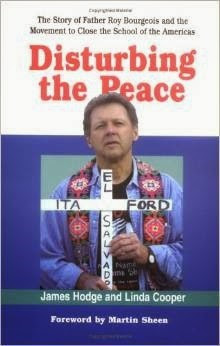 Roy Bourgeois was born in Louisiana in 1938. He was reared in a conservative working-class family, and after graduating from college he spent four years in the U.S. Navy, including a year in Vietnam where he was injured and received the Purple Heart.
His contact with a Catholic priest who operated an orphanage in Vietnam was one factor that led Bourgeois to enter seminary and, consequently, to be ordained as a Catholic priest in 1972. But he certainly hasn’t been a stereotypical priest.
Freshly ordained, Bourgeois began the work as a priest working with the poor in La Paz, Bolivia. In 1975 he was deported from that country, accused of attempting to overthrow dictator Hugo Banzer, who had come to power with the help of a U.S.-supported coup d’état.
Bourgeois found out later that Banzer had been trained by what came to be known as U.S. Army School of the Americas (SOA), and whose official name since 2001 has been Western Hemisphere Institute for Security Cooperation.
The precursor of the SOA was begun in Panama in 1946. From 1961 until long after it was moved to Fort Benning, Georgia, in 1984 SOA educated several Latin American dictators and generations of their military supporters. During the 1980s the SOA included the uses of torture in its curriculum.
Following the release of the U.N.’s Commission on the Truth for El Salvador in 1993, Bourgeois became increasingly opposed to the SOA, which he began to call the School of Assassins.
The 203-page report of the Truth Commission reported that 47 out of the 66 officers in El Salvador who had committed major atrocities were graduates of SOA.
The report also identified two of the three responsible for the assassination of Oscar Romero in 1980 as SOA graduates. One of those was Roberto D’Aubuison, whom I mentioned in a previous article about Romero (here).
SOA graduates were also responsible for the December 1980 rape and murder of Bourgeois’s friend Ita Ford and three other nuns in El Salvador.
Most of his work against SOA for a decade is summarized in Hodge and Cooper’s book, whose subtitle is “The Story of Father Roy Bourgeois and the Movement to Close the School of the Americas.”
In 1990 Bourgeois founded the SOA Watch, and it is still a very active organization. (Check out their website here.) He continues to be an active ally of the proletariat.
In recent years, Bourgeois has been involved in the movement to ordain women as Catholic priests. For that involvement his credentials as a priest were withdrawn by the Church in 2012—but that is a story for another time.
Posted by LKSeat at 5:29 AM