“Easter Is a Shout of Victory!”

Many of you read my 3/20 blog article about Óscar Romero, the Archbishop of San Salvador who was assassinated on March 24, 1980. While celebrating the anniversary Mass of a friend’s death, he was shot and killed in the chapel of the Divine Providence Hospital. That hospital served as a hospice for cancer patients in San Salvador and was also Romero’s place of residence.
Just the day before his assassination, which was the fifth Sunday in Lent, he preached his last Sunday sermon. Here is part of what he said on that occasion:

Easter is a shout of victory! No one can extinguish that life that Christ resurrected. Not even death and hatred against Him and against His Church will be able to overcome it. He is the victor! Just as He will flourish in an Easter of unending resurrection, so it is necessary also to accompany Him in Lent, in a Holy Week that is cross, sacrifice, martyrdom. . . .

Lent, then, is a call to celebrate our redemption in that difficult complex of cross and victory. . . . all who have Christian faith and hope know that behind this Calvary of El Salvador is our Easter, our resurrection, and that is the hope of the Christian people” (cited in Scott Wright, “Oscar Romero and the Communion of the Saints,” p. 127).

In an interview he gave earlier that month, Romero said, “My life has been threatened many times. I have to confess that as a Christian, I don’t believe in death without resurrection. If they kill me, I will rise again in the Salvadoran people.”
And then in the homily he gave a few minutes before being shot through the heart, Romero declared,

Those who surrender to the service of the poor through love of Christ will live like the grain of wheat that dies. It only apparently dies. If it were not to die, it would remain a solitary grain. The harvest comes because of the grain that dies.

Those words were based on Jesus’ teaching recorded in John 12:24. 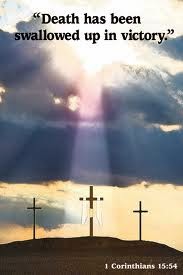 Those of you who, like me, grew up in the rural Midwest know about winter wheat. It is sown in the fall, lies “dead” in the earth through the cold winter, comes to life with greet plants shooting up in the spring, and then produces a harvest in the summer.
That is the image of death and resurrection that Jesus referred to and that Romero believed and emphasized in his last sermon. And that is why he could proclaim, “Easter is a shout of victory!”
According to the teachings of Christianity, the Resurrection is something that Jesus Christ experienced, but resurrection will also be experienced by all of Jesus’ followers—such as Joe Wolven, my old friend who was the best man at June’s and my wedding.
Joe died of cancer on the March 21, just before his 76th birthday on April 1. (June and I are so thankful that we were able to drive down to south Missouri on March 9 and to have a good visit with Joe and his wife Cathy at their home near Galena.)
For the Christian believer like Joe, death is the prelude of resurrection. Death is not an end, but the necessary prerequisite for new life. Thus, as Archbishop Romero declared, Easter is, truly, a shout of victory!
Happy Easter!
Posted by LKSeat at 5:28 AM